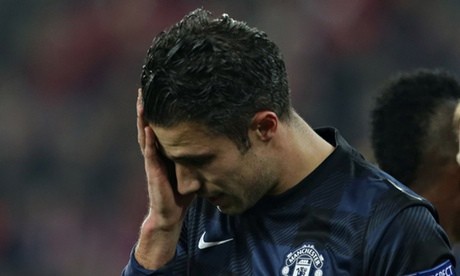 Last thing David Moyes is tensions within the dressing room and senior players voicing their frustrations. After yet another humiliating defeat at the hands of Olympiakos in the Champions League, Manchester United striker Robin van Persie has criticized the tactics of David Moyes.

No. He didn’t say – look, Moyes, this is your mistake & that – but he criticized tactical aspects – which unless you are scatterbrained, could fathom it out that he is pointing towards the system deployed by his manager.

Moyes has always known to be a reactive manager lacking a distinct philosophy like the new wave of managers we have in modern football. Van Persie feels that some of the players are occupying the zone he loves to operate, as a result of which he has to adjust his entire game-style.

Manchester United defender Rio Ferdinand questioned Moyes’ approach of naming the side close to kick-off, and now the Dutchman has voiced his fruatrations as well.

He told the Dutch TV channel NOS: “Our fellow players are sometimes occupying the spaces I want to play in. And when I see that it makes it difficult for me to come to those spaces as well. So that forces me to adjust my runs, based on the position of my fellow players. And unfortunately, they’re often playing in my zones. I think that’s a shame.”

Meanwhile, Jose Mourinho cannot simply stay away from getting indulged into a war-of-words. He loves playing mind games.

Few days back, he was engaged in war-of-words with Arsene Wenger and now ahead of Chelsea’s crucial Champions League tie, he got involved in a row with Galatasaray boss Roberto Mancini.

Mancini (also made similar comments for Manchester City) claimed that some credit for Mourinho’s feat of winning an historic treble with Inter should go to him, as he inherited a very good squad.

This has resulted in a contemptuous response from the Chelsea boss, who guided Inter to Champions League triumph, while Mancini has never progressed beyond the quarter-finals. He said as quoted by The Times:

“It’s funny because my team in the final had Lúcio, Motta, Milito, Eto’o, Pandev and Sneijder. From 11 players, he didn’t work with six of them,” Mourinho said. “So he made a five-a-side team because I played with only five players from his team.”