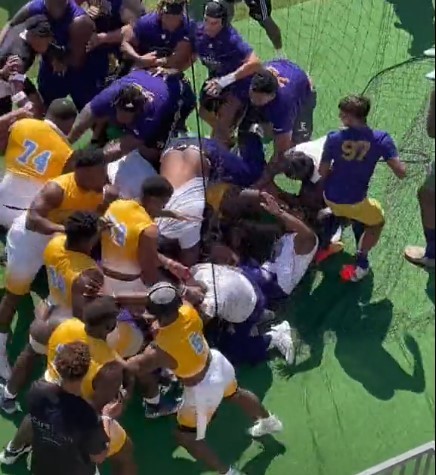 Things got a little heated during pregame warmups between Southern University and Prairie View A&M this Saturday. Jawing back and forth turned to punches thrown as an all-out crazy college football brawl ensued before the teams had even kicked off.

Southern University and Prairie View A&M apparently do not like one another much. On Saturday, as both teams finished part of their warmup a couple of hours prior to kick-off, chaos erupted.

Both sets of players were heading back to their locker rooms when some ‘friendly’ chat began. That evolved into wild, swinging haymakers and plenty of punches thrown. And the huge fight was underway.

It looks as though a majority of players on both teams were involved in the brawl in some capacity. The whole thing lasted about a minute before the teams were separated, but not before some big shots were landed.

so they lost the pregame fight and the actual game? AHAAAAAA pic.twitter.com/wKtWJkAZuJ

There could be some harsh penalties handed down to the players and schools involved in this fight. The Southwestern Atlantic Conference (SWAC) is conducting an investigation into the pregame brawl.

Both schools deny that their players were the cause of the ruckus.

“The Conference office is currently reviewing video of the altercation that transpired prior to the start of the Southern at Prairie View A&M football game held this past Saturday,” SWAC associate commissioner Andrew Roberts said.

Both teams are due to hand over their reports to the office on Wednesday.

Southern Jaguars head coach Eric Dooley is in his first year with the program. His previous four years were spent at Prairie View A&M Panthers and could have been the cause of some of the blood bad between the two schools.

Dooley had no comment to make on the altercation. His Southern team went on to win the actual college football game by 45-13.