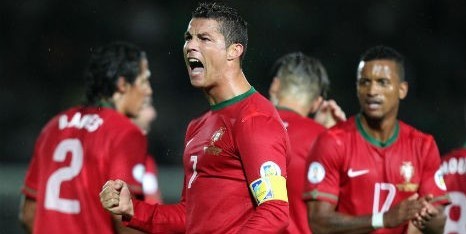 Cristiano Ronaldo is now the second all time top scorer for Portugal, behind Pauleta, after the Real Madrid forward scored a stunning hat-trick against Northern Ireland at Windsor Park.

Ronaldo has already surpassed legendary Eusebio’s 41-goal tally and another five goals will take him to the top of the all time leading goal scorer charts for his country.

Portugal took the lead through Bruno Alves, but soon after Northern Ireland restored parity through Gareth McAuley’s header and took the lead after half-time, when Jamie Ward found the net.

The qualifier turned into a nasty encounter, with Portugal ending the match with 10 men and Northern Ireland nine.

Ronaldo headed home in the 68th min from Joao Moutinho’s corner, and in the 77th minute, gave the lead with another fine header. The Madrid star scored the winner in 83rd minute of the match, with a brilliant (took a deflection) free-kick. He has dedicated this victory to his father, who passed away eight years ago.

With that victory, Portugal moved to the top of Group F with 17 points, two more from second placed Russia, who have a game in hand.