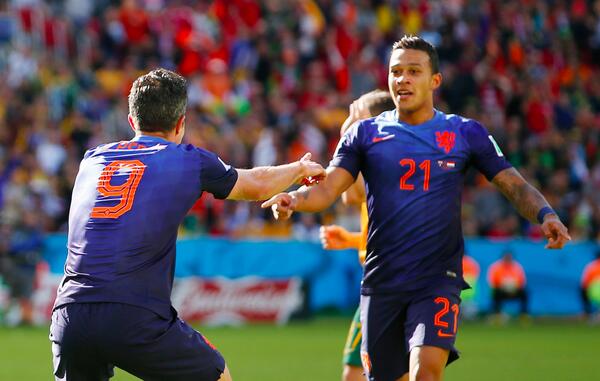 Netherlands maintained top spot in Group B after a second consecutive win in the tournament as the Dutch rode their luck to beat a spirited Australian side by 3-2 at Porto Alegre.

Bayern Munich winger Arjen Robben opened the scoring after a brilliant run and curling past his shot beyond the Socceroos’ goalkeeper to give his side a 1-0 lead as the Oranje picked off from where they left off against Spain.

However, Tim Cahill’s thunderous left foot volley restored parity seconds later as the former Everton midfielder pulled out an absolute rabbit out of the hat to draw his country level.

Minutes later Manchester United striker Robin Van Persie’s superbly taken goal proved to be a vital equaliser as Van Gaal’s side were begining to take a firm grip on the encounter.

Memphis Depay’s brilliant shot from twenty yards in the 67th minutes swerved past the Australian goalkeeper Matthew Ryan to give the Dutch their second win in as many matches in the showpiece event.

Netherlands have guaranteed a place in the round of 16 and will take on Chile in their last group encounter at the Arena Corinthians in Sao Paolo on 23rd June.