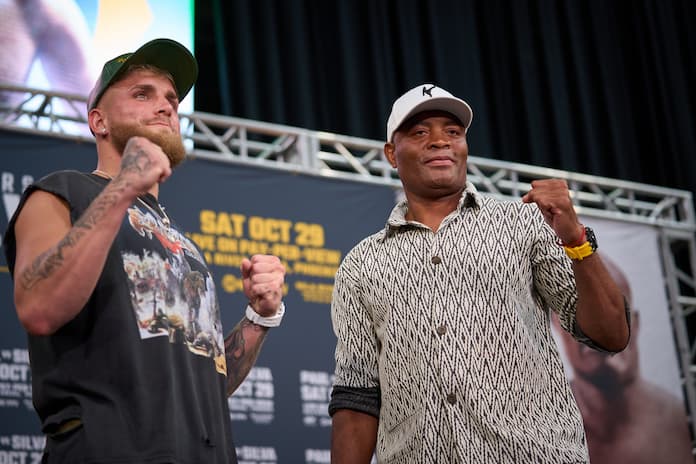 With just over three weeks to go until the mammoth boxing showdown between Jake Paul and Anderson Silva, former UFC star, Tito Ortiz, has given his prediction ahead of the fight. The former UFC Light Heavyweight Champion is backing his former MMA foe to defeat ‘The Problem Child’.

Paul vs Silva headlines at Gila River Arena on October 29th, with the former UFC Middleweight Champion taking on the YouTube star turned professional boxer. It’s sure to be a cracker!

Former UFC Light Heavyweight Champion and legend of the MMA, Tito Ortiz, has had his say on how he thinks the Jake Paul vs Anderson Silva fight will play out on October 29th.

Paul is embarking on his sixth fight in the professional boxing ring. This time, he faces the former long reigning UFC Middleweight Champion, Anderson Silva. Fans are super excited for this bout, which is set to be the toughest of Paul’s career to date.

Last time out, Paul knocked out former UFC Welterweight Champion, Tyron Woodley. That fight was last December, with Woodley stepping in at late notice for Tommy Fury. Paul was of course supposed to fight a few months back, but his fight with Hasim Rahman Jr fell through with weight issues on his opponents side.

For ‘The Spider’, his last professional boxing outing was a first round KO victory over Tito Ortiz, the former UFC Champion. That fight was over a year ago, with Silva not getting any younger at 47-years-old.

Silva’s former opponent and fellow MMA superstar, is backing his former foe to defeat Jake Paul come fight night. Not only does ‘The Huntington Beach Bad Boy’ believe Silva beat Paul, but that he will emphatically knock him out.

The UFC Hall Of Famer thinks that Jake Paul has underestimated Silva big time, and that he is in for a shock when he faces the 47-year-old in the ring on October 29th at the Gila River Arena.

When chatting on the Chattin Pony Podcast with UFC star, Paddy Pimblett, Ortiz had this to say on the Paul vs Silva fight at the end of the month:

“I don’t think Jake Paul’s going to make it out of three rounds, and that’s my opinion, but I think it’s going to be a great fight, because I know Jake Paul puts in great work.

“Jake Paul thinks him being 47 is going to make a difference? He’s going to be in for a rude awakening. One thing about Anderson, he takes this sport very seriously. He takes it as a martial arts.”

Who knows what will happen come fight night, but one thing is for sure – Paul vs Silva is set to be an absolute barnstormer.

Haven’t claimed the Paul vs Silva boxing betting offer yet? Don’t worry, take a look at the best betting sites and claim the best bookmaker free bets. Be sure to also check out the best offshore betting sites.

Here is a list of Bovada‘s prices for the upcoming fight at the end of the month: