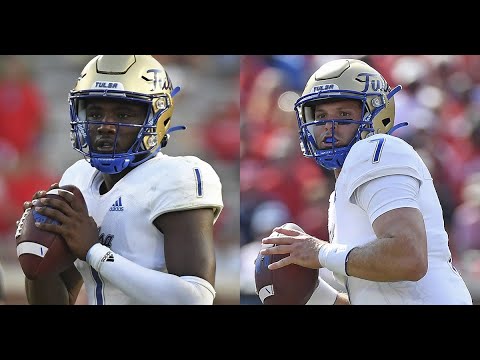 Tulsa Golden Hurricane’s football program could find themselves in a spot of bother at the quarterback position next season. The top two QBs on the team’s roster this year will enter the NCAA transfer portal when it opens on Monday. Davis Brin and Braylon Braxton will look to switch schools next season after Tulsa coach Phillip Montgomery was fired.

Quite the week in Tulsa

It’s been a rather turbulent week for the football program at Tulsa. They fired head coach Phillip Montgomery on Sunday. On Monday, starting quarterback Davis Brin told us via Twitter that he was entering the NCAA transfer portal.

As if that wasn’t enough, backup QB Braylon Braxton announced on Wednesday that he too would be entering the transfer portal.

Starting quarterback Davis Brin played nine games for the Golden Hurricane this season. He threw for 2,138 yards and 17 touchdowns and gave up eight picks. Brin has one year of eligibility remaining.

“I am extremely thankful for my time at Tulsa,” Brin said in a Twitter statement. “After reflecting and praying about my future, I have decided to enter the transfer portal. I am now looking for the best opportunity to fully display my abilities and leadership at a new home for my last year of eligibility. I’m excited for the next chapter! Thank you Tulsa.”

Thank you Tulsa! Excited for the next chapter pic.twitter.com/zLHQzWA63d

With Brin gone, the door was open for Braylon Braxton to take over the starting position for the team based in Oklahoma. However, he also decided his best move was to seek a new school and enter the transfer portal too.

“First I’d like to thank God for the opportunities he’s given me up until this point,” Braxton said in his Twitter statement. “Next, I’d like to thank my family for being with me every step of the way for the journey. Next, I’d like to say thank you to the fan base and the coaching staff at Tulsa for taking me in with open arms and treating me like family.

“With that being said, I will be entering my name into the transfer portal with three years of eligibility remaining to explore my options for my future.”

Braxton was a three-star recruit out of high school. He appeared in nine games for Tulsa this year, starting three and accounted for a total of 15 touchdowns.

It leaves an inexperienced bunch at the quarterback position for the incoming coach, who may need to look at the portal for options themselves.