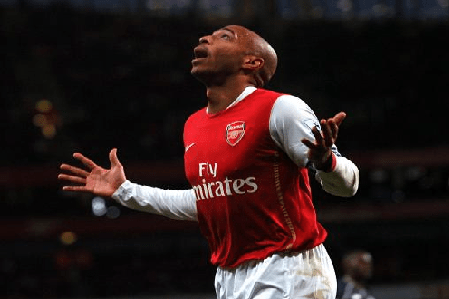 Arsene Wenger has revealed that he will not rule out the possibility of bring Thierry Henry back to the club for a third spell in January according to the BBC.

Henry could be interested in the move which would keep him fit while he’s not playing for current MLS side New York. It has the potential to benefit Arsenal in a number of ways if a deal comes together.

With the African Cup of Nations just around the corner, Arsenal could soon be without key attacking players Gervinho and Marouane Chamakh. Henry would provide valuable cover in the Arsenal squad and would provide competition with Lukas Podolski and Olivier Giroud over a starting role in the side.

It would also benefit Arsene Wenger in his quest to keep Theo Walcott at the club because Henry was in a similar situation to the Arsenal winger. Henry was originally signed by Wenger as a winger before he was converted into one of the best Arsenal centre forwards the club has ever seen. This is exactly what Walcott wants and Henry could help in getting him to sign on at the club.

Wenger has also spoke recently, saying that Henry’s arrival will always create optimism and hope among Arsenal fans and the club in general. He would be used as more of an impact player due to the current form of other Arsenal attacking players but Wenger believes that Henry’s energy and enthusiasm can run off on other players.

Henry’s presence in an Arsenal shirt always creates great authority around the team and combined with the leadership skills of Mikel Arteta, the side could create a very imposing image in any game that Henry is selected for. It effectively takes some of the pressure away from Arteta and makes Arsenal intimidating to play against meaning some opposition sides may start matches on the back foot.