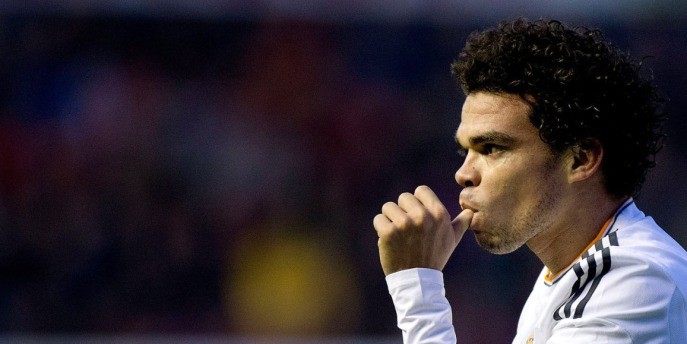 Still no sign of Juan Mata today as the month’s biggest transfer continues to procrastinate something rotten!

Manchester United fans continue to haunt the social networks, desperate for an inkling into what’s going on; while Chelsea fans continue to lament the impending loss of one of their truly great players from the last decade.

Once again, the Transfer Lens is here to distract for the time being. Today Saikat and I tackle two rumours, the first being Manchester City’s apparent £25m bid for Portuguese defender Pepe; while Liverpool are gearing up to swoop for alternative targets to the Chelsea-bound Mohamed Salah.

According to the Daily Star, Manchester City have had a £25m bid for Real Madrid defender Pepe rejected by the Spanish giants.

City defender Joleon Lescott is perennially linked with an exit from the club, and if reports are to be believed, Manuel Pellegrini is wasting no time in finding a replacement.

While the City attack continue to devastate Premier League defences, there have been real doubts over the abilities of their defence, and it is an area of growing concern for Pellegrini.

Pepe has continued to be a real focal point for Madrid this season, and is still considered to be one of the world’s best centre back performers.

Pepe is a really excellent defender, and partnered with Vincent Kompany at the back, City would be as close to impregnable as you can get!

But considering that Real hold him in such high regard, and that his contract still has two years to run, I can’t see this happening.

A good thing perhaps, as City should concentrate on nurturing Matija Nastasic, who looks a real talent, and would drop down the pecking order if Pepe were to arrive.

With primary target Mohamed Salah looking very likely to complete a move to rivals Chelsea in the coming days, Liverpool have reportedly switched their attention to alternative attacking options in the market, with Dynamo Kiev flyer Andriy Yarmolenko one such alternative.

It is not the first time Liverpool have had to consider alternatives, as the Salah move had looked all but dead earlier on the month due to Basel’s initial unwillingness to negotiate.

This is where the first links to Yarmolenko appeared in the Daily Mail (report via the Independent), and now Brendan Rodgers may be looking to rekindle said interest in the Ukrainian once more, with Salah now out of reach.

The 24-year-old Yarmolenko is very highly rated in Ukraine, and is valued between £15-£20m. Yet with his current contract set to expire at the end of next season, there may well be room to negotiate the price down.

Used anywhere along the attacking midfield row, and most recently as a striker, Yarmolenko has reached double-figures in each of the last three seasons, and already has 15 goals from 24 games this season.

Yarmolenko would be be a brilliant signing for the Reds.

He is a very talented player and would improve the squad, no doubt. But after what happened with Salah and Chelsea, I find myself quite skeptical about whether Liverpool are serious about finding proper targets and, most importantly, landing them.

What do you think? Agree with our verdicts? Let me know in the comments below…