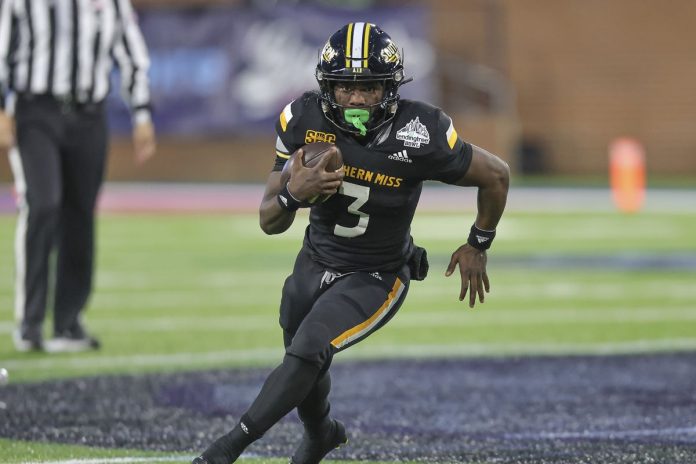 Southern Miss running back Frank Gore Jr. put the pedal to the metal as he racked up an FBS bowl game record in the LendingTree Bowl on Saturday. Gore Jr. rushed for 329 yards against Rice on just 21 carries. Gore Jr. is the son of future NFL Hall-of-Famer Frank Gore, who spent 16 years with numerous teams in the league including the 49ers, Colts, Bills and Dolphins.

Frank Gore Jr. is looking to follow in his father’s famous footsteps and he certainly piqued the interest of scouts in the LendingTree Bowl. Gore Jr. rushed for a massive 329 yards on just 21 carries and scored three total touchdowns as he passed for one and rushed in two on Saturday.

The third-year sophomore was in fine fettle this season. He averaged 6.1 yards per carry and rushed for a total of 1,382 yards. He found the end zone nine times, beating his previous season high of six in 2021/22.

He now has 2,891 rushing yards and 17 total touchdowns for Southern Miss in his three years at the program.

The record was previously held by Appalachian State running back Camerun Peoples. Peoples put up 317 yards against North Texas in 2020. The only other running back to break 300 yards in a bowl game is PJ Daniels of Georgia Tech. He ran for 307 yards in the Humanitarian Bowl in 2004.

Southern Miss eventually won the game by a score of 38-24. In addition to Gore’s absurd rushing game, he also slung a few passes. He went 2/3 for 19 yards and a touchdown. He has thrown for seven touchdowns in his career with the program.

The win meant that Southern Miss finished the season with a 7-6 record. Meanwhile, Rice ended up a disappointing 5-8.

Southern Miss currently has the third best recruiting class of 2023 in the Sun Belt Conference. They also seem to be looking to the transfer portal to make some savvy signings and improve once again next season.