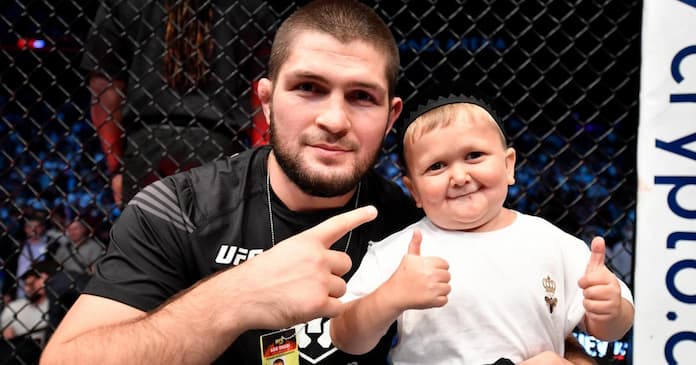 Hasbulla, the social media star and friend of former UFC Lightweight Champion Khabib Nurmagomedov, has official signed on the dotted line with the UFC. Despite being just 3ft 4in tall, the Russian celebrity has signed a deal allowing him to fight in the UFC octagon.

Hasbulla Confirms He Will Fight In The UFC

In possibly one of the maddest stories of the year so far, Hasbulla Magomedov has confirmed that he has officially signed with the UFC.

The social media sensation suffers from a form of dwarfism, but has not let that get in the way of him living his dream and fighting in the UFC octagon. The 20-year-old has signed a five year contract with the company.

Hasbulla has thanked UFC President, Dana White, along with fellow Dagestan native, Khabib Nurmagomedov, for making his dream become a reality in signing for the biggest mixed martial arts organisation in the world.

The rumors are true. I have officially signed a deal to fight in the @ufc! Details will be revealed by the end of the year. Thank you to my team for making this dream a reality. Get official Hasbulla @ufcstore merch at https://t.co/tP0lr6csNs or https://t.co/odYE41G3xf pic.twitter.com/Jv1QmkN25Z

With Hasbulla announcing that he has signed with the UFC, heavyweight champion, Francis Ngannou, has joked that he has found his next title defence against the Dagestan man. Here is what Ngannou said on Twitter:

I think I have my next title defense @Hasbulla_NFT pic.twitter.com/2NPWYdn7uj

‘Mini Khabib’ is one of the biggest stars on social media right now. Hasbulla has over 2.1 million followers on Instagram, as well as over 4.3 billion views on TikTok.

It is not yet known when the new signing for the UFC will make his octagon debut. However, an announcement is expected to be made in the not so distant future, with the Russian supposedly in training and ready to fight.