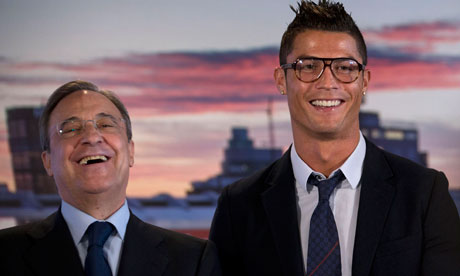 Finally the wait is over. Cristiano Ronaldo has committed the rest of his playing career at Real Madrid after signing a five-year-contract, which will keep him at the Spanish club until 2018.

According to Sid Lowe of Guardian, Ronaldo could earn as much as €18m a year after tax, plus 50% of his image rights, which would make him the world’s best-paid player. And certainly, after signing this new deal, he has poured cold waters on all hopes of returning to his former club, Manchester United in future.

The money quoted above is after-tax, so if we take the pre-tax value into consideration, the salary would come down to around €36m/year gross or £580,000 a week wages.

Ronaldo, who has scored 204 goals in 203 games for the Los Blancos, has earned high praises from the club president Florentino Perez.

“In Cristiano, we have the best”, he said. “We believe Cristiano can continue this incredible dynasty of unique players with the ability to make history for the club.

“He is, and he will be, forever a ‘Madridista’ [Real Madrid fan].The best player in the world knows that this is and will be his home forever”.

Ronaldo says it is a ‘privilege’ for him to continue at this iconic club and treats it as a very special day in his life. And when asked about the salary he will get, the Madrid star replied:

“That’s not the most important thing. Money is important but it was never a priority. I don’t care if I’m the first or the third [highest paid player]. I just feel fine”.

Ronaldo was linked with a move to his former club Manchester United this summer. The player has time and again admitted his love for his former club and here again he showed great respect saying that he would never forget the glorious years he spent at Old Trafford, but would like to keep it as past memory.