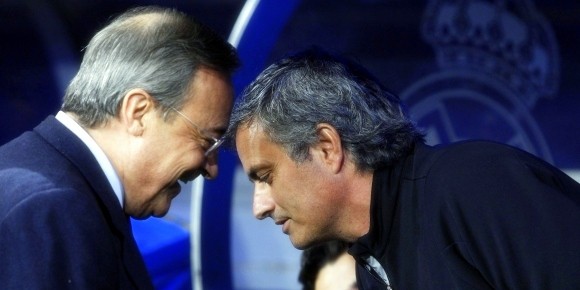 The Spanish newspaper Marca reports of rifts between the Real Madrid manager Jose Mourinho and the club president Florentino Perez.

Moreover, the newspaper claims that Mourinho will be on his way out at the end of this La Liga season. Some of the reasons stated for the rift are:

The whole problem between Florentino and Mourinho started over the signing of Maicon from Inter Milan. The request by the manager could not be granted after negotiations between Real and the player broke down. The Brazil international demanded a €5 million per season salary, which the club refused to pay.

Representatives of the Portugal national football team arrived in Madrid seeking to convince the club to lend them its manager to stand in as the manager of the national team for ten days. Florentino refused.

After the first year of Mourinho in charge of the capital club, Gonzalo Higuain was recovering from a slipped disc. He demanded a number 9 but with the lack of funds, he recommended an affordable option: Hugo Almeida. In the end, Mourinho did get his way with the arrival of Emmanuel Adebayor from Manchester City.

Valdano, the doctor & the cook

A year into his tenure at the club, Mourinho got rid of Jorge Valdano, Dr. Hernandez and Chechu, the cook. With Valdano no longer around to keep the peace between the president and the coach, Jose Angel Sanchez, the general manager, is all that stands between an all-out clash.

Mourinho’s demise is also a making of his mishandling of the dressing room heavyweights. His players back him in public, but things are different behind closed doors. As much as Florentino despises it, Mourinho believes some difficult decision may have to be taken with some of the heavyweights.

Mourinho insisted that the club sign a former player with a media presence. He knew exactly what player matched the profile, but his candidate, Luis Figo, was ruled out because he left Madrid on bad terms during Florentino’s first term as president.

The final episode occured in the run up to Saturday’s derby against Atletico Madrid which exhausted the club president’s patience. Mourinho dared the Madrid fans to come and jeer at him before the match. He wanted them to cheer for the team during the game, however, Florentino did not like Mourinho’s provocation one bit.

If these stories are to be believed and Mourinho does become available from next season, the debate of the Chelsea manager and Alex Ferguson’s replacement will only be fueled. At least, Pep Guardiola will not have to suffer alone.