Well, well, well. Only yesterday, we saw a breathtaking performance from Liverpool talisman Luis Suarez and equally good performance from Philippe Coutinho, and there you go, Spanish press reports Real Madrid are planning a £80m move for the Reds duo in the summer.

Madrid’s interest in Suarez is nothing new, albeit nothing was concrete from their end. Liverpool were determined to keep Suarez in the summer and they even rejected double bids from Arsenal.

Liverpool’s best chance to keep hold of Suarez is by finishing in top four and qualify for the Champions League. Further, the Reds would be willing to sell him to any foreign club than to any Premier League rival clubs and therefore Madrid have a better chance of getting him, should Liverpool fail to qualify for UCL next season. 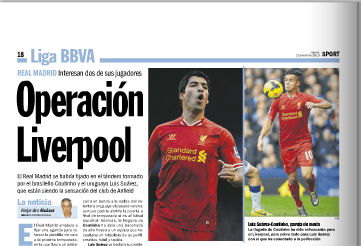 According to report from Catalan based newspaper Sport, Real Madrid could be willing to pay up to €80m for Suarez and Coutinho. They have cited British press as their major source. We take a look at the truth behind the story. Daily Star has published an article on it and they took the report from Sports Direct News, who has a habit of fabricating stories out of nothing. And it is the same man again, Exclusives from Mark Brus, who is making a habit of selling false rumours.

There is no logic behind why Real Madrid would want Coutinho when they have avalanche of attacking midfielders at their disposal and it is highly possible that Mark Brus in his dream world has fabricated yet another non-sense story.