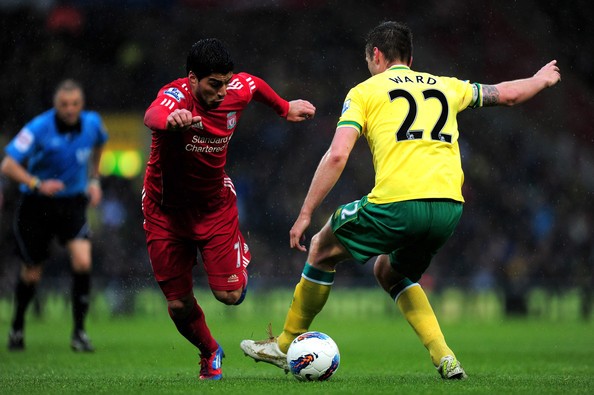 The Reds are two points clear of Chelsea at the top of the table after ten straight wins in a row and manager Brendan Rodgers knows that an eleventh triumph will put his side within touching distance of winning the title this season.

Liverpool will be without the suspended Jordan Henderson, who picked up an avoidable straight card after needlessly crashing into Samir Nasri in the dying moments of the game at Anfield.

Rodgers has to make a key decision on who should replace Henderson in the starting eleven. Will Joe Allen start in what would be a flat 4-3-3 setup? Or should Lucas Leiva slot in to act as a screen for the back four enabling Steven Gerrard more freedom to express himself on the pitch.

There are also injury concerns over striker Daniel Sturridge but Rodgers believes the prolific Englishman should recover from his hamstring injury to take the pitch on Sunday.

Norwich however have problems of their own, the Canaries are currently 17th in the table, just two points above safety in the relegation battle. The Canaries have managed only one victory in their last seven matches and new manager Neil Adams is under pressure to steer his team clear above the threatened drop zone.

Prediction: Luis Suarez has been Norwich’s nemesis scoring eleven goals against Norwich in his last four games against the Carrow road side. Liverpool’s desire to win the title should comfortably give them a 3-0 win over the relegation threatened home side.