Atletico Madrid striker Diego Costa is on course to make a startling recovery and play in the Champions League final on Saturday, despite sustaining a grade one hamstring injury last week against Barcelona. 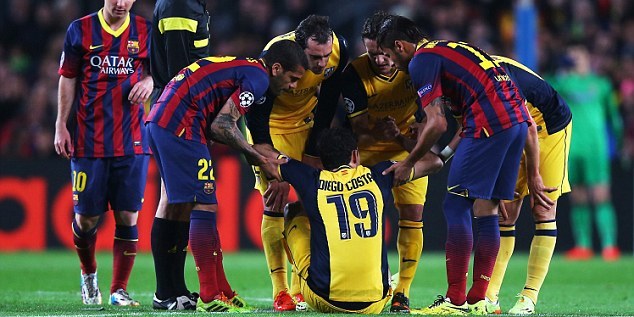 The 25-year-old hitman, who is said to be close to joining Chelsea in the summer, was taken off in tears on the weekend, and despite Atletico securing a first La Liga title for 19 years, Costa looked set to miss out on the biggest game of his career, against fierce rivals Real Madrid in Lisbon.

But the striker flew to Belgrade earlier this week to receive treatment from controversial doctor Marijana Kovacevic, who applies horse/human placenta to her patients in order to heal muscle tears and general damage.

The treatment may have just worked, with Atletico confirming that the striker has returned to training ahead of tomorrow’s match, and will fly to Lisbon with the rest of the squad.

Teammate Arda Turan, who was also deemed to be a doubt for the match, also returned to training on Thursday.

Diego Simeone’s Atletico team is not straightforward to predict, with both Costa and Turan (due to their current fragility) not nailed on starters, and there is even some doubt over which formation Simeone will play against Los Blancos.

Atletico have switched between 4-4-2 and 4-2-3-1 formations this season. He has started to favour the former, as shown in the last five games, the Argentine went for a 4-2-3-1 formation just once against Malaga. But in three of the four games in all competitions against Real Madrid, Simeone has plumped for the 4-2-3-1.

If Costa recovers, and considering the precedent set against Real, it is likely that Simeone will start with the 4-2-3-1.

Be sure to join us for the match on Saturday, with ‘Soccerlens LIVE: The Champions League Final’ set to start at 5pm GMT. Click here to bookmark it!