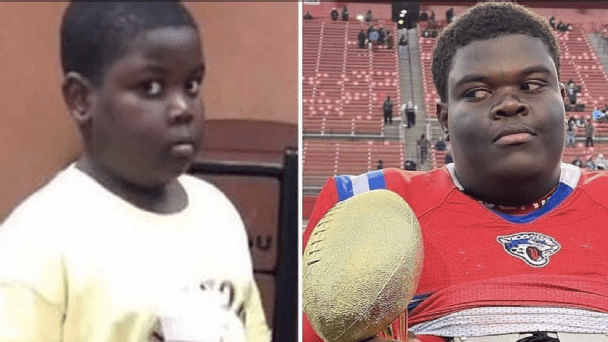 Dieunerst Collin went viral as a child when a video of him on Vine giving some side eye in a Popeyes restaurant became a meme. Fast forward to today and Collin is playing on the offensive line of Division II college football team Lake Erie College. With some help off the internet, Collin has now translated that meme into real cash as he signed an NIL deal with the Louisiana chain famous for their fried chicken.

From Meme to Money

Dieunerst Collin has managed to transform his years old meme into some real life dollars after signing an NIL deal with Popeyes. Collin, who now plays Division II football with Lake Erie College won a regional championship and a picture of him posing with the trophy inspired the internet to get their boy a deal with the ‘Louisiana Kitchen.’

A tweet by @JimMWeber started the momentum for the Popeyes deal.

“The @Popeyes meme kid @CollinDieunerst is now a freshman offensive lineman at Division II Lake Erie College and if this guy doesn’t have an NIL deal by tomorrow, the Louisiana kitchen needs to clean house on upper management,” Weber’s tweet stated.

The @Popeyes meme kid @CollinDieunerst is now a freshman offensive lineman at Division II Lake Erie College and if this guy doesn't have an NIL deal by tomorrow, the Louisiana kitchen needs to clean house on upper management. pic.twitter.com/JTQs9JhhPk

The tweet garnered attention quickly and has over 50,000 likes and close to 8,000 retweets. Included in those retweets was one from Collin himself, urging his followers to go to his Instagram page and tag Popeyes.

I NEED EVEYONE TO GO TO MY INSTAGRAM @dieunerst REPOST MY RECENT POST AND TAG @Popeyes I JUST WANNA TALK🙏🏾 pic.twitter.com/Fq00ylsJqs

“I NEED EVERYONE TO GO TO MY INSTAGRAM @dieunerst REPOST MY RECENT POST AND TAG @Popeyes. I JUST WANNA TALK,” Collin tweeted.

Whatever Collin and Popeyes talked about, ended up in Collin getting an NIL deal with the fried chicken franchise.

On Thursday, Popeyes tweeted that they were proud to welcome Dieunerst Collin to ‘the fam.’ Popeyes decided to go with a slogan that read ‘From Memes to Dreams,’ and also stated they are now the proud sponsor of Collin. Even though the value of the NIL deal is currently unknown, Collin is finally cashing in on his fame.