There is hardly anything left to say about David Moyes that has not been told or written elsewhere in the media.

Manchester United have had a disastrous campaign so far. They are seventh in the Premier League, out of all domestic competitions, and their fate in Europe is also hanging in the balance.

Under Moyes, United suffered some embarrassing ‘firsts’ in the league, including:

Below, we can see a stunning group of stats, focusing on Moyes’ performance in the last two seasons. Bar one less goal conceded for United, the Scot has overseen a statistically identical 29 games, back to back! We here at Soccerlens are just flabbergasted. 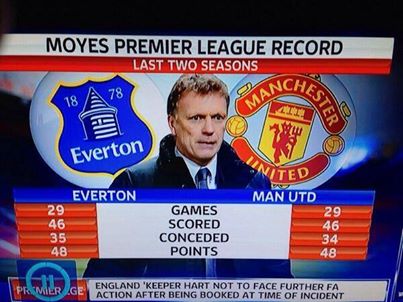 Moyes is on thin ice, that’s for sure. Would he survive an embarrassing result against Olympiakos? Or would that be the final straw?

What do you think? Give him time, or get him out? Let me know in the comments below…