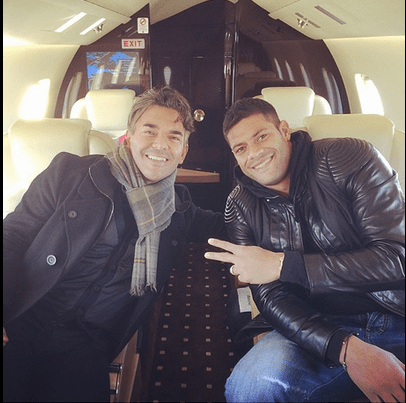 Zenit St Petersburg striker and Chelsea transfer target Hulk has caused an stir in the social media by posting a picture of himself along with his manager flying to London on a private jet.

To add fuel to the fire, the picture was posted on the same day that the Russian club sacked their manager Luciano Spalletti.

Chelsea have had been linked with the Brazilian striker on more than one occasion, while the Daily Mail claims that the Blues even tried to sign him last summer as well.

Hulk moved to Russia in 2012 from Porto for a massive transfer fee, but the move hasnt worked out too well.

Hulk is accompanied by his manager in the picture, with the caption:

“Going to work in London. With my manager and friend #Teo”

Chelsea boss Jose Mourinho is on the look out for a new striker in the summer after recently expressing his disappointment with the current bunch he possesses.