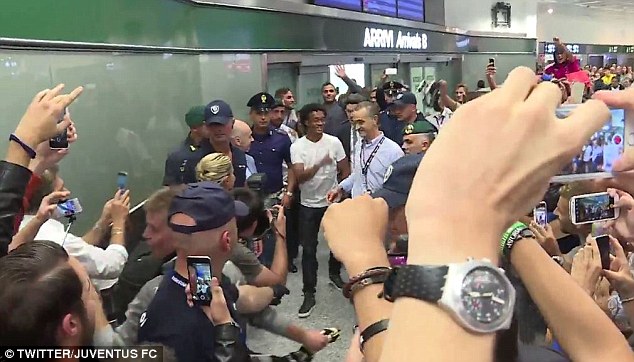 Chelsea winger, Juan Cuadrado has arrived in Italy for his Juventus medical.

The former Fiorentina winger has struggled to settle into the Premier League and is now on his way back to Serie A after just 8 months in England.

Chelsea spent 23 million pounds on the highly rated Colombian, who has been a star in Serie A and for his national team.

However, Jose Mourinho has never quite managed to get the most out of the Colombian, who has now been replaced by new signing, Pedro Rodriguez, from Barcelona.

Cuadrado enjoyed great success at Fiorentina and will be hoping to replicated that with Juventus.

The Chelsea player will join Juventus on loan this season.

Chelsea have been active in the transfer market this week and are looking to sign John Stones from Everton.

After landing Pedro from Barcelona, Chelsea are also keen to wrap up another marquee transfer in the form of Paul Pogba from Juventus.

Cuadrado loan could well be a deal sweetener for Jose Mourinho, who is an admirer of the former Manchester United midfielder.

According to reports in the English media, Chelsea are preparing to smash the British transfer record for Paul Pogba.