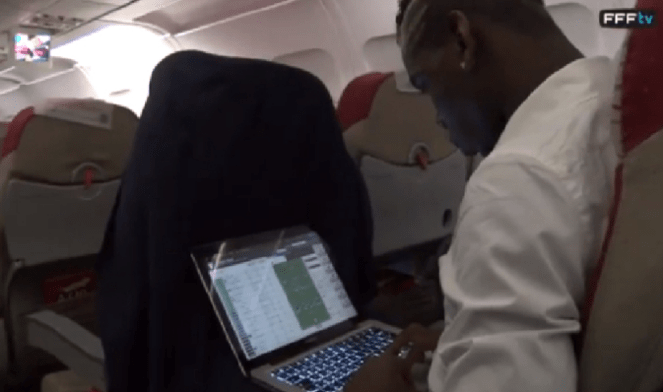 France moved into the next phase of the World cup after they humiliated Switzerland 5-2 in their last game. Paul Pogba came on as a substitute in the match and provided a delicious assist for Karim Benzema’s goal.

On the plane back to Ribeiro Preto, the Juventus midfielder was seen playing Football Manager, where he placed himself in the middle of the pitch alongside Chelsea’s Frank Lampard in a match against Arsenal.

While it was just a game, but it will only add speculations about his future. The 21-year-old former Manchester United midfielder has established himself into one of the finest midfielders in the world at the moment. And there are several European heavy weights vying for his signature including the likes of Chelsea and Manchester United.

While Juventus have shown no inclination to sell their precious asset, the Bianconeri might to tempted to do any business, should an offer of €45m-€50m is put on the table.

Does it show Pogba has a soft desire to play for Chelsea? Or are media speculating too far here?