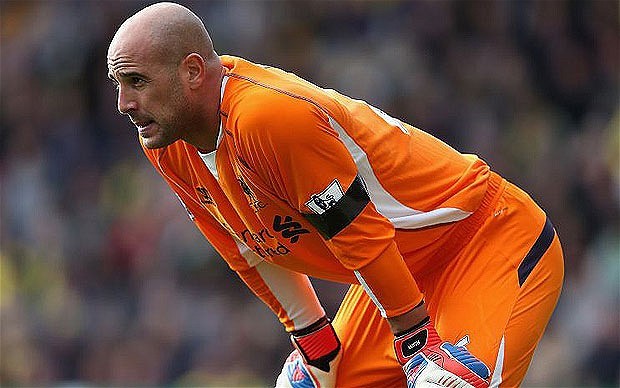 Napoli president Aurelio De Laurentiis wants a permanent deal for Pepe Reina, who is currently on loan from Liverpool.

The 31-year-old Spanish goalkeeper is on a season long loan from Liverpool after Brendan Rodgers considered him surplus to requirements.

After Napoli’s 2-0 victory over Juventus, club president De Laurentiis revealed he wants Pepe Reina to stay and also promised bonuses to players if they finish second in Serie A.

Aurelio De Laurentiis spoke to the reporters after his side’s 2-0 victory over Juventus:

“After yesterday’s victory I went down to the locker room and I promised the players a bonus if they can finish second.

“Then I talked to Reina and told him that he must remain with us. I want him confirmed for next season. He was happy, for him it was a double reward.”

Brendan Rodgers earlier confirmed that he wasn’t impressed with Pepe Reina’s attitude and that his goodbye letter was unnecessary.

“He’s already written his letter, hasn’t he? He wrote a goodbye letter, didn’t he?” Rodgers said,

“I was surprised at the letter – when you are a loan player I would expect that he should come back, but obviously Pepe made it very clear when he went to Napoli that he was looking to move.

“He penned a great, big letter saying he was going to work with the best manager that he’d worked with and thanked for his time for Liverpool. So, for me, it probably sounded like he’d made his decision there.”

Reina was signed by former Liverpool manager Rafael Benitez in 2005. The Spaniard enjoyed few good seasons at the club, before his form deteriorated, forcing Rodgers to look for options elsewhere.

Pepe Reina has been average this season at Napoli after a good start. With Simon Mignolet doing well at Liverpool, it seems like Reina’s future at Liverpool is all but over. It remains to be seen, however, where he will end up next season.