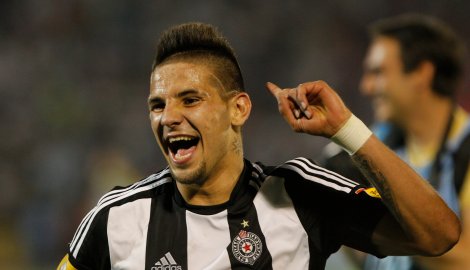 Jose Mourinho probably chose to enjoy the international break by going on a scouting mission. What else could be the possible reason for him to take a keen interest on Serbia and Croatia encounter, when there were other mouth-watering fixtures being played elsewhere?

The Portuguese was probably taking a keen note of Serbian wonder-kid Aleksandar Mitrovic. The 18-year-old striker (reportedly Arsenal target), who is already a familiar name among the European football lovers, was named among the top ten talents under the age of 19 in Europe, by a selection of European reporters.

And he didn’t disappoint either last night. Croatia took the lead through Bayern Munich striker Mario Mandzukic in the second half. Serbia equalized in 66th min through a terrific header from the young lad.

After the game Mourinho found time for himself to speak highly about the teenager. The Portuguese said to the Belgian press Sportwereld:

“Mirtovic was the best player on the pitch. He managed to keep the ball well and that was the key. That boy has everything to be a European star.”

The youngster, who has joined Belgian club Anderlecht this season from Partizan Belgrade has expressed his happiness for his Belgian team-mates, as Belgium won their qualifying match 2-0 against Scotland.

Chelsea were left frustrated in the transfer window in their pursuit of a top striker and missed out on several big name forwards, and eventually signed Samuel Eto’o. Further, another former Anderlecht youngster Romelu Lukaku has been sent on loan to Everton, to further his progress.

Though former Chelsea player Nemanja Matic, with whom the Blues had been linked this season, was also present, but it seems Mourinho has been pretty impressed with the Serbian wonder-kid.

Chelsea already have an avalanche of young attacking players in their ranks. Whether Mitrovic gets added to that constellation remains to be seen, but Chelsea fans won’t be too disappointed with signing a player of world class potential.