PSV Eindhoven forward Memphis Depay has delivered a message today on his instagram, on the day when both Manchester United and PSV have confirmed that an agreement has been reached between both the clubs for the Dutchman.

Manchester United have agreed a fee around £25m for the 21-year-old Dutch international, who will undergo a medical in Manchester next week. 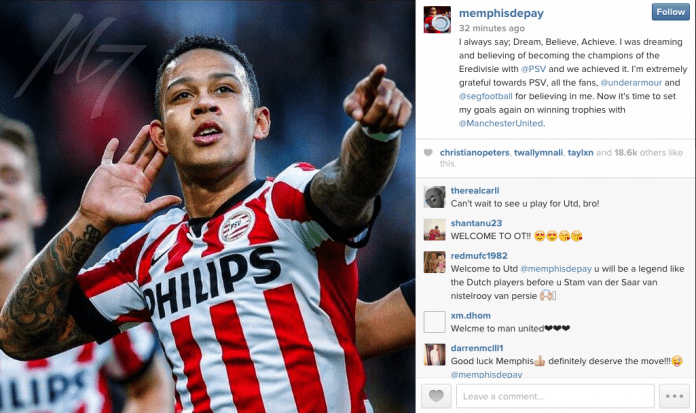 “I was dreaming and believing of becoming the champions of the Eredivisie with PSV and we achieved it. I’m extremely grateful towards PSV, all the fans.

Depay, who was also a reported target of Liverpool and PSG, has become the eight signing at United under Louis van Gaal.

United have a tradition of signing players from PSV – Depay becomes the fourth player to have joined Old Trafford from the Dutch club.

Depay, mainly operates from the wings, has enjoyed a phenomenal season for PSV, where he scored 21 goals and managed four assists to his name.

The youngster was a part of the Dutch side that finished third in the FIFA World Cup in Brazil under Louis van Gaal and he scored two goals in the competition.