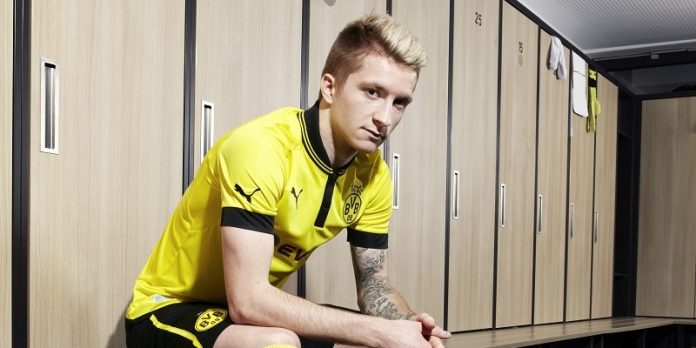 The 23-year-old Marco Reus moved to Borussia Dortmund in 2012 after spending three seasons at Borussia Monchengladbach. During his first season at Dortmund, the Germany international became an integral part of the Jurgen Klopp set-up.

Klopp’s Dortmund team is preparing for the Champions League final tomorrow and they have been the only ones in Europe to be able to tackle the might of Bayern Munich this season. Bayern’s hammer fell the hardest on a depleted Barcelona side in the semifinals.

Borussia Dortmund will be wary of the threat in the Bayern ranks. They have seen them off before and it is going to be a fiery fixture with goals expected from both sides.

Question: Being part of the Dortmund Champions League final squad is a great position to be in for a professional footballer. Did you seriously expect this when you moved to Dortmund last summer?

Marco Reus: It is truly an amazing feeling to play in the final of the Champions League with the BVB at Wembley. Ahead of my transfer to Dortmund I definitely hadn’t thought about this being a possible scenario.

I simply wanted to get settled at the club, show my best football and gain some first experiences in the Champions League. That the season would finish for us with such a highlight is just incredible, but also well deserved.

Q: How do you feel about playing Bayern in the Champions League final? Would you rather have had a chance to play Barcelona since you have never played against them before?

Marco Reus: In the final, the two most successful teams of the season always meet. With Bayern Munich we might have an opponent whom we know better than any non-German team, but for German football this is a big achievement, which is great.

Q: Why do you think Bayern performed so strongly in this year’s Bundesliga season?

Marco Reus: I really don’t know the exact reasons, but I think this season they were really determined to re-gain the title. Also they have an extremely strong squad, which obviously helped as well.

Q: What will be different about playing Bayern in the Champions League final compared to a regular league match?

Marco Reus: This match is going to be a final of a huge tournament, after which one team will lift the trophy and the other simply won’t. This is an exceptional situation and all players will play at their absolute limits for 90 or even 120 minutes, which will make it very different to a normal league game.

Q: What is Bayern’s biggest weakness?

Marco Reus: The weakness, if there even is one, we will try to find and use for our means.

Q: How will Dortmund celebrate if they win the Champions League?

Marco Reus: Those plans will be organised without our influence. I will only concentrate on the match and then we will see what happens.

This interview is brought to you courtesy of Borussia Dortmund partners PUMA.