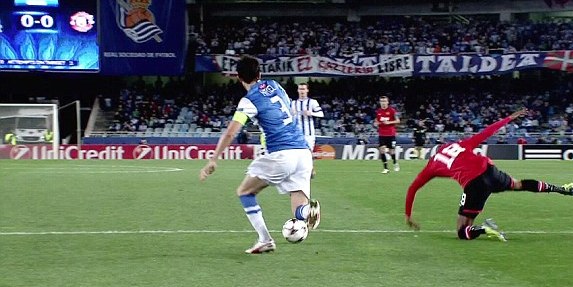 Manchester United’s 0-0 Champions League stalemate with Real Sociedad on Tuesday heralded a few unpleasant firsts for the club. It was midfielder Fellaini’s first red card for the Red Devils, and it was also Robin van Persie’s first penalty spot miss this season.

Yet, among all the firsts, a cringingly familiar repeat of Ashley Young’s contemptible art of simulation once again surfaced.

The England winger has endured a torrid time of late, even without the derision concerning his diving antics, as his sub-par performances continue to disappoint the Utd faithful. But when he resorts to his old tricks, namely becoming a human push puppet on cue, the world of football unites to condemn and denounce.

Roy Keane was chief amongst them, attacking Young’s actions after the game,

“You could say he’s obviously played for it. If you’re a Manchester United player and you see a player getting tugged back you want him to go down.” Keane said in his capacity as ITV pundit,

“Ashley Young has obviously gone down too much over the last few months. He’s been heavily criticised in England, but of course we’re playing in a foreign country and it’s almost more acceptable. But I think he’s conned the referee there.”

Another former United midfielder, Ray Wilkins was equally as scathing,

“This (dive) is pathetic,” Wilkins said,

This is as bad for me as all these over the top tackles we’re getting at the moment because that is a conning of the referee. I just wish Ashley would cut this out because he’s a good player but he’s getting a bad name.”

Infamously known as one of the premier operators of simulation in English football, Young’s penalty winning dive ultimately did little to help the United cause, as Van Persie’s resulting attempt was clawed away by Sociedad keeper, Claudio Bravo. It set the tone for the evening, as chances went a-begging for United, and the draw now barely keeps them at the summit of Group A.

Boss David Moyes remains optimistic of his side’s chances of progressing, and well he should, but any optimism he and the fans may have over their winger hanging up his imaginary trip-wires may be misplaced.

Moyes’ cagey response to questions over Ashley Young was poignant, with the obtuse amount of blame the United manager attached to the referee hinting at a behind-closed-doors intervention.

“I’ve seen it,” said the Scot, concerning the Young incident. “The boy tugs him in the box. The referee is two yards away from it and decides to give it.

“He’s got a penalty kick for a decision tonight. I don’t know about his reputation, but the referee is there and he gave it.”

The United manager has previously warned Young of his behaviour, certainly proving he knows of the winger’s ‘reputation’, and this latest repeat will ask strong questions of Moyes’ man-management skills.

It would be naïve to suggest that diving is not part of the current makeup of the game, or that Young is the only exponent of the hotly contested subject; but the ill-feeling surrounding it is as warranted as that of the goal-line technology argument. What makes it that much worse is Young’s undeniable ability when on form, as seldom a sight as it may be.

Capable of magical trickery, aggressive running, and inventive interplay, Young seemed worth the £18m United gambled on him in 2011. But with his loathsome penchant for deceiving the officials, he is as likely to leave David Moyes in a PR quagmire as he is likely to leave a defender for dead on the pitch.