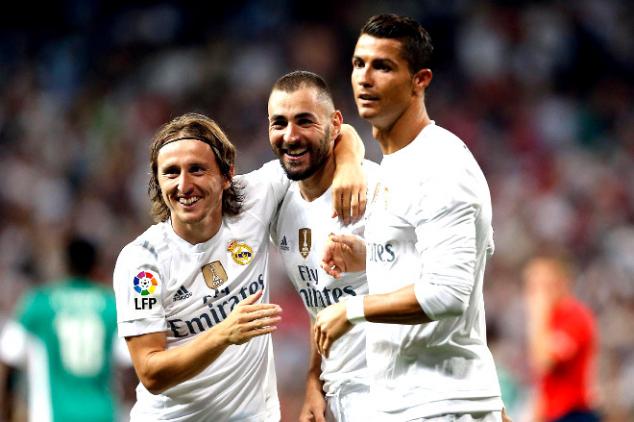 Real Madrid superstar Cristiano Ronaldo is ready to leave Santiago Bernabeu next summer, with Manchester United and Paris Saint-Germain could be interested in signing the Portugal superstar.

Spanish Football Expert Guillem Balague wrote in his column for AS that Ronaldo wants a new challenge in his life, and that he has always dreamt of returning to Old Trafford someday.

According to David McDonell of the Daily Mirror, the Portuguese forward could be interested in leaving Madrid, after spending seven years in the Spanish capital. Manchester United could be ready to break the bank to re-sign the two times FIFA Ballon d’Or winner. McDonnell says it would take a world record transfer fee of £90m to sign the 30-year-old forward.

McDonnell says that sources close to Ronaldo’s camp believe a more realistic figure would be around £70m mark. However, Ronaldo could also favour a move to PSG next summer, should he decided the time is right to leave Madrid.

The Reds would be willing to meet Ronaldo’s £15m-a-year wage demands, on top of the fee, knowing the commercial revenue his return would generate, allied to his influence on the pitch, would more than offset such a huge outlay.

Despite his past history and emotional bond with United, however, it is understood Ronaldo would favour a move to PSG next summer, should he decide the time is right to leave Real.

But that would not stop United making a concerted effort to woo back one of the greatest players in their illustrious history, one still missed by their fans and whose name is still sung by the United crowd.

Ronaldo has recently broken Raul’s record to become the all time leading goal scorer at Real Madrid, and he is just one short of reaching 500 goals in his career. He remains a popular figure with the United fans, after helping the club win three league titles and the Champions League during his six-years stay.

The question here is do United at all need Ronaldo now? When he joined United as a scrawny teenager he was an out-an-out winger, who would love to dribble past players, show off his skills, and try to win matches by the scruff of the neck. But now he has moved into more central role where his main job is to score goals, and he is doing that at an impeccable rate. He is still a very important player for Real Madrid, probably the best no 9 in the world who has let others grow around him.

By bringing Ronaldo back, the club will not only be getting a player the fans adore, but goals are guaranteed from him. Plus, Ronaldo would like to retire at the club that gave him so much respect and love, and helped him become a player what he is today. Plus, he would take no time in adjusting to the pace of the league.

On the flip side, spending £90m on a player who would turn 31 next summer doesn’t make enough sense in terms of business. The money could be used elsewhere.

Balague believes the chances of Ronaldo returning to Old Trafford is slim, despite the fact he shares a great bonding with the United fans. He is looking for a new challenge in a new country, which should boost PSG’s hopes of signing him.