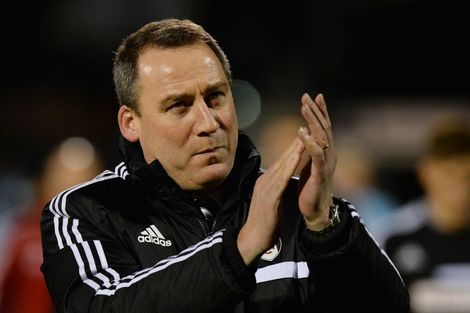 According to reports by Dutch newspaper De Telegraaf former Manchester United first team coach Rene Meulensteen has expressed his desire to return to OLd Trafford with Louis Van Gaal in the summer.

Meulensteen who spent ten years at United and was regarded as Sir Alex Ferguson’s right hand man admitted that Van Gaal has the pedigree to be a success for the Red Devils.

“There’s no reason why it wouldn’t work but the most important thing is that they need to get it right and make sure that the man who is going to come in respects the history and culture of the club. As well they must make sure he builds the best possible platform to build United back to where they belong as quickly as they can.”

The 50 year old Dutch was briefly in charge at Fulham this season but was unceremoniously sacked following poor performances by the Cottagers, who are now relegated under Fleix Magath.

Meulensteeen had earlier said that David Moyes underestimated the challenge at United and paid the price despite warnings from members of the coaching staff.

“I think he has a little bit underestimated and ignored some of the advice that people were giving there, not only from myself, but Eric Steele and Mike Phelan, we were trying to help him and say: Listen, we can make your life really, really easy. That’s why I came out with a quote before saying: You’re going from a yacht to a cruise ship.”