Sporting midfielder William Carvalho is one of the hottest properties in Europe at the moment, and is being chased by several European heavyweights, including Manchester United.

United scouts have watched him a number of times, while the UK media going so far as to suggest that a deal has already been done! Take a look back at some of the reports here:

Have a look at this! March 22, The Mirror: Manchester United William Carvalho deal: Fee of £37million agreed – move to take place after World Cup

In reality, nothing has happened yet. 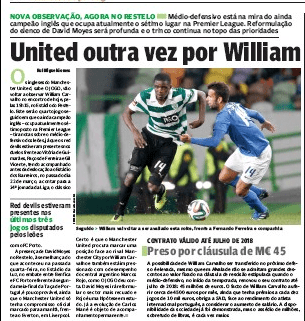 Portuguese newspaper ‘O Jogo’ reports today that United scouts will be present today again to watch the youngster in action at at Belenenses. And that will be four games in a row!

Carvalho is a highly talented midfielder, no doubt, but will it be advisable to pay €45m for a 22-year-old who has yet to prove himself at the highest of stages?