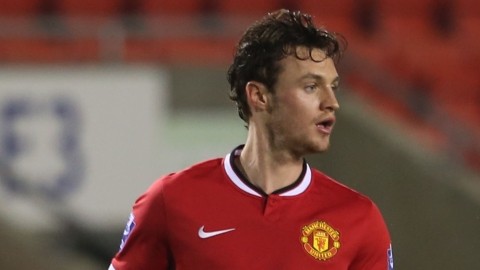 Manchester United have confirmed their striker Will Keane has joined Preston North End on a season-long loan on Wednesday.

Preston were promoted to the Championship and will play in the second tier of the English football for the upcoming campaign. After loan spells at Wigan Athletic, Queens Park Rangers and Sheffield Wednesday, Keane will return to the Championship next season.

A statement on United’s official website read, “Manchester United striker Will Keane is to spend the entire 2015/16 season at Preston North End after signing for the newly-promoted Championship club on loan.”

Keane has told Preston’s official website that he is delighted to join them on-loan and has urged to give his best for the Championship side.

“I’m really excited to be here and I’m looking forward to the new season and the challenge ahead,” Keane said.

“I want to come here and do my best to help the team. They had a very successful year last year and hopefully the whole club and the team can build on that this season.”

The Chilean international was a part of the national squad which won the 2015 Copa America on home soil. He had an impressive season with Dinamo Zagreb last season and Henriquez has joined them on a permanent transfer this summer.

The situation leaves the former Barcelona and Bayern Munich manager with Wayne Rooney and James Wilson, along with Robin van Persie and Javier Hernandez.

The latter two striker’s future at United are uncertain as they have been constantly linked with a move away from Old Trafford. According to Sky Sports, Van Persie has already agreed a deal with Fenerbahce.

Should the Dutch international leave United, Van Gaal needs to bring in a replacement to fill in the void left the former Arsenal captain’s departure.