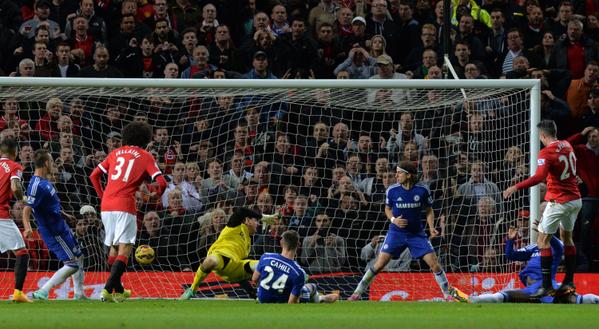 It looked like Chelsea were on their way for yet another Premier League victory. The fear factor at Old Trafford had long dissipated, the sheer thought of Manchester United might find their old habit of scoring late goals didn’t even occur to mind. It needed one moment of brilliance, human error or poor referring decision to change the outcome of the game. All these three fell in place in the 94th minute, as Robin van Persie’s thunder strike sealed 1-1 draw for the home side.

Louis van Gaal had to reshuffle his defence with Phil Jones missing out with injury. The England midfielder only recovered from an earlier injury last month picked up during international duty in September, will once again continue his rehab for a considerable period of time in the treatment room. It must be frustrating for the manager to see his first choice defenders – Jones, Evans and Smalling – getting frequently injured.

Situation with Jones, Evans & Smalling is an embarrassment now.Jones misses out again with another injury. How long will LvG put up with it?

And to think #MUFC medical staff instructed management team that they felt Jones, Smalling & Evans would have their ‘most available’ seasons — James Ducker (@DuckerTheTimes) October 26, 2014

As we predicted here, both Diego Costa and Loic Remy were left out of the squad. Andre Schurrle didn’t feature as a false nine, which means Didier Drogba started up front as a lone striker.

* Usually we see a cautious approach from both teams in any big match. Here it was just the opposite. Fast paced. Fabulous. Frenetic. Drogba showed his physical strength to set up a one-two with Oscar outside the box, while Januzaj-Mata-Di Maria-Van Persie quartet created few half chances.

* Rafael saw an early booking after a foul on Eden Hazard within first 15 mins. It prevented the Brazilian taking enough risks in the match, allowing Hazard to express and influence more as the game progressed.

* Since all the four United’s attacking midfielder were all primarily left-footed, the home side were enjoying more joy on the left flank.

* Fellaini, courtesy of his brilliant second half performance against West Brom got the nod ahead of Ander Herrera yesterday and the Belgian didn’t disappoint. He did a brilliant job in man-marking Cesc Fabregas, and his disciplined approach helped United keep the midfield shape intact. Basically, he added more physical bite to the team, as a result it took off the pressure from Daley Blind a lot. The Dutch midfielder could only focus on tackling and retaining possession and thereby handled the game better than expected.

* May be Chelsea midfielders made a mistake by not pressing on him. United did an excellent job by not allowing Fabregas to dictate the tempo of the game.

Apart from the Fellaini-factor, another reason why Fabregas couldn’t impose his authority is because he was left exposed quite a number of time. Drogba doesn’t have the legs to press as much like Costa or Remy when Chelsea do not have the ball, therefore Oscar has been dragged off his position leaving Fabregas exposed.

* Chelsea however were more effective in the final third. But, the final touch was missing from both sets of players.

For example, Willian got himself into a good position, one-on-one with Smalling, but a combination of poor decision and a heavy touch saw him missing out on a good opportunity to score. Likewise, Drogba got himself into an acres of space in the box and should have scored as well. Rojo failed to clear a long ball properly that allowed Oscar to get into a good position and pick the right pass, and once Hazard took his marker away with him, all Drogba needed was to connect properly and find the net. Although, he hit the shot well, but fell straight into De Gea’s safe pair of hands.

* Best chance of the game probably fell to Mata. Januzaj picked him up with an intelligent square pass, unmarked, but the Spaniard blazed it over.  Mark Ogden of The Telegraph sums it up Mata’s performance nicely: “Mata possesses a silky touch and his work-rate is admirable for a flair player, but the quality of his end product is debatable, never more so than against the powerhouses of the Premier League.”

* Ivanovic penalty shout – They say “A picture is worth a thousand words“. It was a daylight penalty. No argument. Check the picture below 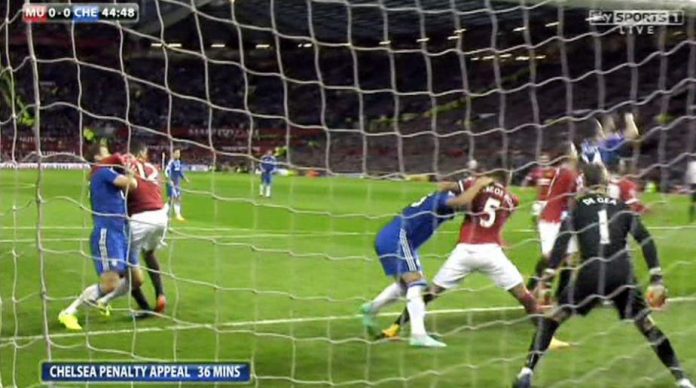 * Hazard played a nice one-two with Drogba and breezed past Di Maria, but couldn’t beat De Gea from a point blank range. Many Chelsea fans commented on twitter that Hazard should have been clinical in front of goal, but sometimes you have to give credit to the opposition as well, in this case, the Spanish goal keeper did an exceptional job to thwart away the danger.

* From the resulting corner Didier Drogba scored for the Blues with a thumping header. First, Why Rafael, a 5″8 was marking a giant tall striker on the near post? Second, Van Persie should have done better and third, at 36, Drogba proves he is no pushover and that he is still a big match player.

* Cesc Fabregas, who was almost non-visible in the first half, had yet another assist to his name; his 8th of the season, more than any player in Europe’s top five leagues. John Obi Mile replaced Oscar to give a defensive solidity in the midfield alongside Matic. It also allowed Fabregas to play with more freedom and impose authority in the game. His passing accuracy in the first half was as poor as 63% only, but it improved to 93% in the second half.

* Both the wingers switched flanks that saw Di Maria providing crosses after crosses in the second half. He provided 18 crosses in the match, but rarely found the target man.

And when he finally did, in the 94th min, it resulted in an equaliser. Fellaini’s header was saved by Courtois but the Belgian couldn’t save the returning fierce shot from Van Persie.

* Late goals always add confidence to the team. United have shown great resilience, character and attitude. Both the managers felt they could have earned full points from the match had they taken their chances, but for United it was more of a ‘relief’ than anything else. Van Persie sums it up nicely:

* Courtois and De Gea are the two best goal keepers in the country. They stood out above anyone else in the match. Do United at all need Victor Valdes?

*  And finally, had Chelsea not conceded two late goals in Manchester, they would have maintained a 100% winning record. They are unbeaten in the league and six points above Man City, that’s frightening for the Premier League.