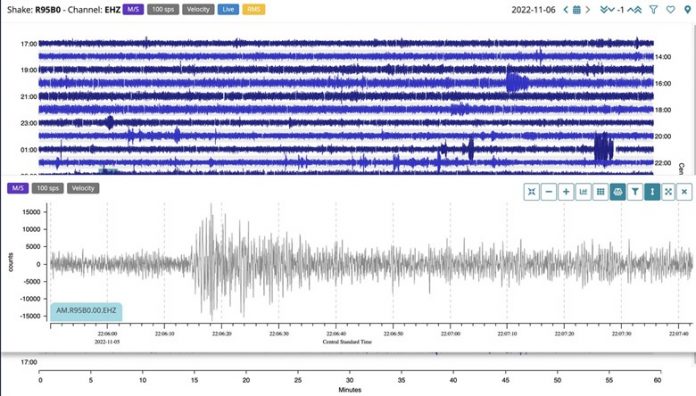 LSU Tigers fans made the earth move twice this weekend when their college football team beat Alabama in a top-10 clash in Baton Rouge according to football today. The LSU College of Science registered activity on their seismograph when LSU scored an overtime touchdown and again when they converted the 2-point conversion for the win against the Crimson Tide. Not only were Alabama hit with the loss but the Death Valley mini earthquake must have shaken them to their core.

It was not the biggest game of the weekend (that honor belonged to Tennessee vs. Georgia), but it was the game that made the biggest noise. LSU’s victory over Alabama caused activity on the LSU College of Science seismograph twice according to their Twitter account.

“At 10:03 pm Saturday night in Death Valley, @LSUfootball scored a touchdown in overtime.

At 10:06, the Tigers scored the game-winning 2-point conversion. BOTH moments registered on our @LSUscience seismograph!”

At 10:03 pm Saturday night in Death Valley, @LSUfootball scored a touchdown in overtime.

At 10:06, the Tigers scored the game-winning 2-point conversion.

The seismograph chart is pictured with the tweet and shows the clearly visible spikes at 10:03 PM and 10:06 PM.

There are no confirmed reports of exactly how loud it got at Death Valley but reports suggest anywhere from 110 decibels to 130 decibels. These are in the range of jets taking off or a close range gunshot.

See for yourself in the video below just how noisy it got. This was the game winning two-point play and it looks like chaos. The scenes we all love as NCAAF fans.

#LSU How awesome was this moment to beat Alabama? The crowd was so loud it registered on the seismograph 🤯🤯

LSU knows a thing or two about an earthquake game. https://t.co/51ncFPj1FC pic.twitter.com/YSDERATwfj

LSU is famous for causing a seismograph to register movement in 1988 when they beat Auburn. That game was dubbed the ‘Earthquake Game’.

We got to witness the sequel to that game this weekend in a thriller. LSU entered the game ranked 15th and the CFP rankings will be released on Tuesday.

Next week, the Tigers travel to Arkansas.