Liverpool suffered a disappointing 2-2 draw at Anfield on Saturday against Aston Villa and lost further ground in the title race. 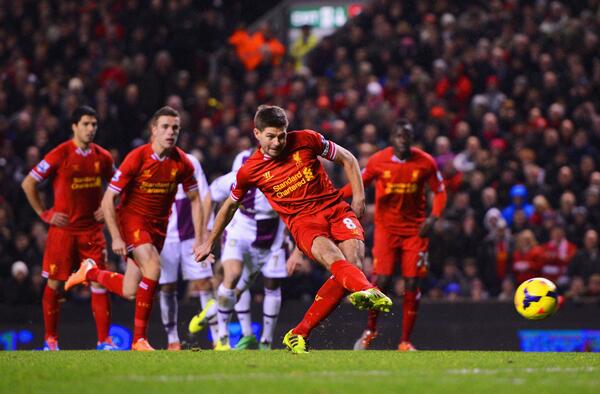 The Reds manager Brendan Rodgers dropped Lucas Leiva for this match and introduced Steven Gerrard in the defensive midfield role. Gerrard who did well against Stoke City, struggled badly against the pressing midfield of Villa.

In the second half, Rodgers allowed Gerrard to play upfront bringing Lucas on in place of Coutinho. However, after Lucas got injured, Liverpool’s balance was disrupted again and they had to remain happy with one point only from the game.

Gerrard’s performance was criticized by Liverpool fans in Twitter. We bring you some of the tweets here:

@Support_Believe If Rodgers had balls to bench Gerrard & spring him for 20-30 mins in behind SAS, not in DM/Regista role we’d really benefit

Gerrard will be retired by weekend. 5 years ago he could do that role. Toure has gone from signing of season to Cissokho level. Runs in

Thought Gerrard was awful yesterday,no legs and offers little. Sad to think that he’ll be captaining england in brazil #deadwood