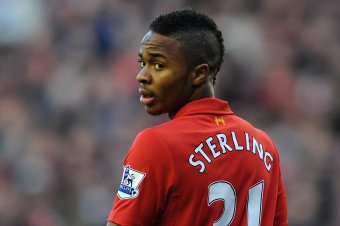 Liverpool winger Raheem Sterling has advanced by leaps and bounds since breaking into the first team at Anfield last season. The youngster has become a regular not only for the Reds, but also for the English national team. This season, with Luis Suarez sold to Barcelona and Daniel Sturridge out injured, a lot of the responsibility to deliver up front has been on Sterling.

Brendan Rodgers though, faces a tough battle to keep his precious starlet at the club. Sterling, who turned 20 this Monday, has, unsurprisingly, attracted a lot of interest from several top European clubs, including Real Madrid and Paris Saint-Germain.

Reports today in The Telegraph have stated that sources close to the club have said that the two parties are “nowhere near any agreement” over an extension. Sterling currently earns £30,000 per week, and talks are being held over a new contract worth £70,000 per week. But, with Liverpool being eliminated from the Champions League following a draw against Basel on Tuesday, Sterling may demand something more.

There are no suggestions that the Englishman wants to leave Anfield, with the source stating that he is ‘committed to the club’. But Liverpool will want to tie him down to a long-term contract as quickly as possible.