Is Emre Can The Answer To Liverpool’s Midfield Problems? 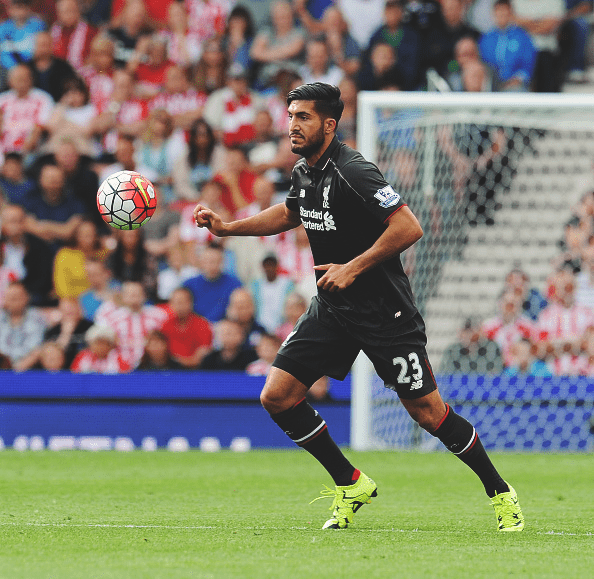 Liverpool have been one of the busier Premier League clubs in the summer transfer window so far, bringing in seven new faces (eight, should you consider Divock Origi), including big money signings Christian Benteke and Roberto Firmino.

The club have shown their intent to improve an attack that mustered just 52 goals last season. But a lot of the transfer window clamour have been for a midfield reinforcement, in particular at the back of midfield where the options are, namely, Lucas Leiva, Emre Can and Joe Allen.

Among the aforementioned trio, Allen is rarely used as an enforcer-cum-destroyer, while Can has yo-yoed between being a centre-back in a three-man defence, a box-to-box midfielder in the presence of a holder behind him and as a holder himself, albeit sporadically.

While Liverpool struggled to a win over Stoke City at the weekend courtesy of a Philippe Coutinho wonder goal, one thing was vivid in the team’s patterns. Can came on after the hour mark thus allowing the Reds to morph into a more progressive 4-1-4-1 shape, which resulted in a higher tempo in their attacking plays and provided the spark the game badly needed at that stage.

Before the advent of Can in the Stoke game, Liverpool struggled to impose themselves in the central areas, leaving wide, open spaces in front of the rear guard as captain Jordan Henderson found himself in unfamiliar territory as the deepest of the two midfielders, while James Milner was used as a press initiator.

Consequently, the Reds’ build up play from the back was cagey and unconvincing, with little to no control in the whereabouts of the hole. And all this was before Can replaced the ineffective wide man Adam Lallana. Can brought about calmness in possession and conviction in passing, which in turn forced Stoke into vertical compactness.

What started as a situational man-oriented pressing scheme from Mark Hughes’ side turned into a bank defending shift after Can’s introduction. The German dropped into the hole to receive passes from the defenders and the goalkeeper, and also played in between the two centre-backs to build up play from the back.

How much influence Can had for Coutinho’s winner is hard to quantify, but his introduction definitely prompted Hughes to bring on the more disciplined Steve Sidwell for Charlie Adam as Liverpool forced forward with both Henderson and Milner, and it was Sidwell’s mistake of sticking too tight to Coutinho which led to the Brazilian tricking his way into space to unleash a 30-yard screamer.

Liverpool are short on numbers in the important control zone of the base of midfield, a situation which will become desperate if Lucas is allowed to leave. Can’s injury history suggests he misses a sizeable chunk of action every season, but he is keen to improve his fitness to hold down a regular starting spot in the starting eleven.

The 21-year-old showed in the win over Stoke that he could become a vital cog in Brendan Rodgers’ setup this season. He could be the pivot on the back of which Henderson and Milner drive forward, and has shown in his little cameo at the Britannia Stadium that he is ready to take on the mantle of the departed Steven Gerrard in the side.

Not quite like Gerrard in the way he plays, but his influence could go a long way in defining Liverpool’s progress over the next nine months.