Liverpool defender Daniel Agger has come under transfer spotlight again. Couple of days back, Spanish radio station Cadena Cope reported that Barcelona are still interested in the stylish defender and could make a bid for him in the summer.

Agger has featured only 19 times this season under Brendan Rodgers, thanks to an injury ravaged campaign. Rodgers has preferred Skrtel and Sakho, as his first choice centre-backs, and with new defenders expected to arrive in summer, Agger could drop further down the pecking orders at the club. 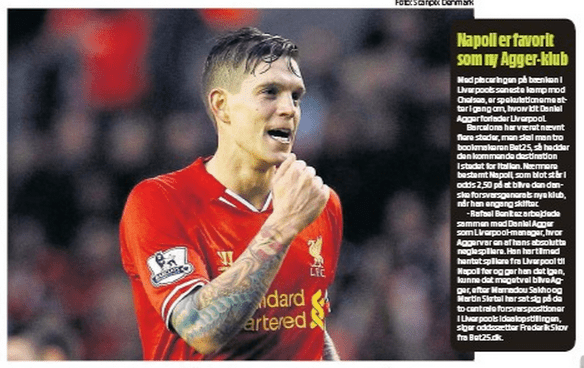 Danish newspaper BT reports that according to Danish bookie Bet25, Agger’s next destination is Italy and not Barcelona. The Naples are at 2.50 odds to land Agger next season, while 10 times the odd, if he lands at Barcelona.

Rafa Benitez signed Agger when he was the manager at Liverpool. The Spaniard tried to sign Agger last season and is expected to go for him again in the summer as well. Although Agger has a contract till 2016, however, it could be possible that Liverpool might cash in on the 29-year-old.

Liverpool have a good relationship with Napoli, having sent Pepe Reina on loan in summer and Rodgers might be willing to do business again, should right offer arrives for the Denmark international.