Jurgen Klopp has been very active in the summer transfer window having added six new faces to his squad. The German manager’s aim with his club for this season would be to try and finish in the top 4 spots, but competition will be increasingly tough. Players have to step up and prove to the manager they deserve to stay at the club for a long time.

Here are four Liverpool players who face a make or break season.

It is difficult to believe the Liverpool captain is the first player on this list but Jordan Henderson now has his biggest season ahead. The midfielder has proved himself once before, and it’s time he repeats that because there is a lot riding on how he does. Henderson is 26 and hence has his peak years still in the bottle. It is his foot injury that has made life a little complicated for him for if its a recurring thing, his career could be in serious trouble. Nevertheless, he still has the manager’s trust and has made a successful return after being out for a considerable time last season. He even featured for England in the Euros.

New addition Giorginio Wijnaldum is capable of playing anywhere in the midfield and considering he was bought in for 25m, it is likely he is going to feature prominently during the season. Emre Can looks like a sure starter under Klopp. Marko Grujic has also done very well in the pre-season. Adam Lallana and James Milner are other players who often operate in the midfield. The 26-year-old Liverpool captain therefore has plenty of competition for a spot in the midfield and must take every opportunity with both hands. Considering Liverpool don’t have as many games this season, there are less games for every player to prove their worth to the manager.

The former Southampton faces a crunch season ahead. While Wijnaldum will challenge all the existing midfielder because of his versatility, it is Lallana’s spot that comes under major scrutiny since both the players are attack minded and usually operate from the midfield. 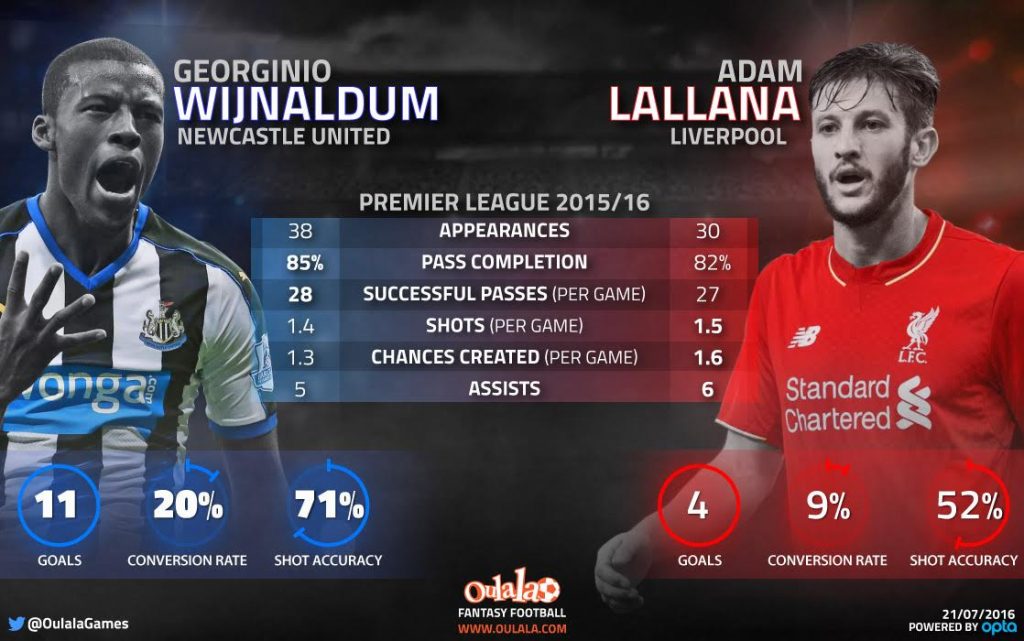 Juxtaposing the duo’s stats, one can see how the former Newcastle United man and Lallana are at par in almost every department. It is the goals scored what really determine the winner of this battle. While Lallana is capable of scoring a screamer every now and then. on so many occasions, the player misses simple chances in the box. His conversion rate and shot accuracy are frankly embarrassing for an attack minded player.

Some of the criticism Lallana has received in the past has been unwarranted because he does seem to add a fair bit in the game, things that cannot be recorded by statisticians. So often, without the England international, Liverpool look starved of any enthusiasm and energy. This is why Klopp seems to trust the player as energy and pressing is so crucial to his system. However, end result is very crucial as well and Lallana seems to lack a fair bit in this department. He is 28 and this year represents his best chance at proving why he deserves to stay at a club aspiring for trophies.

The opinion on Dejan Lovren has always been divided. Some feel he is a talented defender who sometimes does too much while others feel he is just not a good player. Most would however agree that the Croatian improved significantly under Jurgen Klopp. At the same time, Klopp knows Liverpool’s performances at the back warrant changes and it won’t be long till the former Southampton player is marginalised. Klopp is clearly taking it seriously, as he sold Martin Skrtel, a player who was at the club for many years. He added Joel Matip and Ragnar Klavan to strengthen the back-line.

It is difficult to predict who will be Klopp’s preferred centre-back pairing but with five centre backs, and Joe Gomez added to the list once he returns from injury, there is enough competition for everyone to be on their toes. Lovren needs to be vary of his place and show same character, resilience and heart at the back, as he did on multiple occasions last season, to ensure he would still be at this club for this season.

Almost everyone thought Mignolet will be shipped out this summer. Strangely enough, the goalkeeper was rewarded with a long-term contract sometime last season. Liverpool then went and bought talented young German Loris Karius in the summer so it became difficult to predict whether the Belgian would stay on with the club or be happy with a second choice role.

Loris Karius started the pre-season very well and got most Liverpool fans excited but was unfortunately injured in the clash against Chelsea. His injury has come as a blessing for the Belgian goalkeeper. The German has been ruled out for almost two months and Mignolet now has a chance to prove his worth once again. While it is more than likely that Karius will be reinstated in the starting line-up once he makes his return, Mignolet could make things tricky for the German if he does well in his absence. Mignolet has proved time and again that he can guard the post admirably, his form after returning to the line-up after being dropped in the 2014-15 season was absolutely brilliant. Then again, he is prone to making many defensive errors and his set-piece defending is laughable on occasions. It all depends on which Simon Mignolet turns up for the start of next season. That will determine his future at Liverpool Football Club.