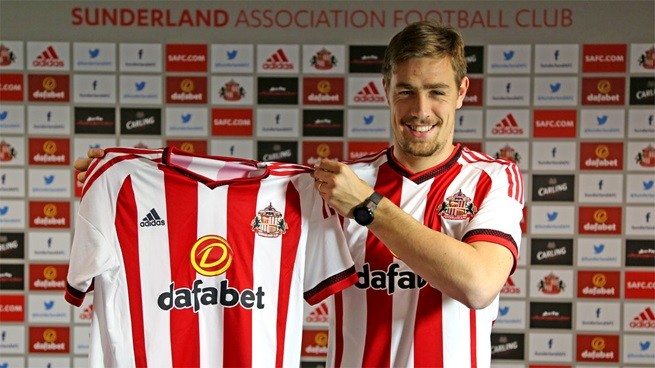 Liverpool have confirmed their defender Sebastian Coates has joined Sunderland on a permanent transfer on Wednesday.

The 24-year-old was not included in Brendan Rodgers’ plan last season and was sent out on-loan to the Stadium of Light. The Uruguayan international spent the entire 2014/15 campaign with the Black Cats.

A statement on Liverpool’s official website read, “Liverpool FC can confirm that defender Sebastian Coates has today completed a permanent transfer to Sunderland.”

“The Uruguayan spent the entire 2014-15 campaign on loan with the Black Cats, making 13 appearances in all competitions. Now the north east club have sealed a deal to take the 24-year-old to the Stadium of Light.”

The Merseyside club are willing to offload fringe players and Coates could be followed by attacking players Fabio Borini and Rickie Lambert, who have struggled to get regular playing time last season.

Rodgers have already managed to add new faces to Liverpool squad as they added over half a dozen of players to their squad in the ongoing summer transfer window. On the other hand, Coates has become Sunderland’s first summer signing.

The Black Cats’ sporting director Lee Congerton is delighted to have added the South America defender to Sunderland’s squad.

“Sebastian was an important part of the team under Dick last season and we are delighted that he has joined us on a permanent basis,” Congerton said.

“He has Barclays Premier League experience, which is important and, after spending last season on loan with us, he will be able to settle into the team very quickly.”