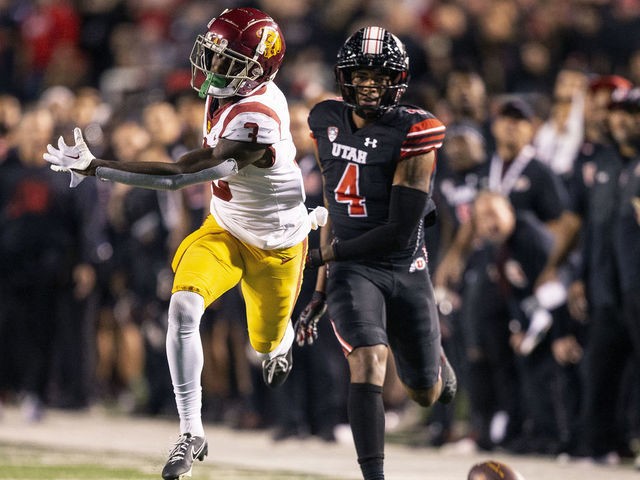 USC wide receiver Jordan Addison was seen on crutches after the Trojans’ loss to Utah. The injury looked severe when he could be seen in agony on the ground after taking a hit, and head coach Lincoln Riley provided an update on his condition today.

USC star wide receiver Jordan Addison crumpled in a heap on the sidelines after an awkward looking tackle against Utah on Saturday. Meanwhile, there were a few social media posts on how head coach Lincoln Riley totally blanked his star as he lay on the floor writhing in agony.

Absolutely DYING at Lincoln Riley seeing Jordan Addison writhing on the ground in pain and being like, "welp, the doctors got this, back to the game." pic.twitter.com/ygiv1IU0gR

While Riley did not address the latter point in his press conference on Tuesday, he did give an update on Addison.

That will be a relief to USC fans who would have been expecting the worst, but hoping for the best. Addison was seen on crutches after the game on Saturday. While it is unclear when Addison will return to action, his status as day-to-day at least means he does not require season ending surgery.

Addison lighting it up so far this season

Addison had been on an absolute tear this year. He has seven receiving touchdowns on the season so far, enough to tie for sixth overall in college football. Addison is the undoubted number one wide receiver on this Trojans team and it’s not close. He leads the team in targets, receptions, receiving yards and receiving touchdowns.

The stud wideout is currently being mocked in first round of 2023 NFL drafts. Avoiding long-term injury will likely be a relief to the young wide receiver. Addison could have seen his draft stock plummet if the news was not better.

The number one receiver role will now likely be turned over to Mario Williams. Williams is a sophomore transfer from Oklahoma. He currently has four touchdowns and just under 500 yards on the season.