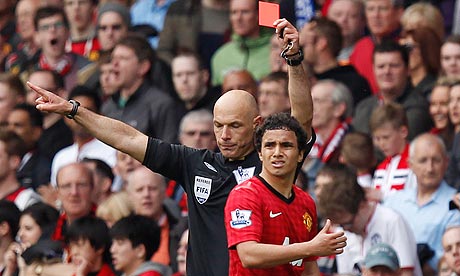 Howard Webb will take charge of the first Manchester Derby clash on Sunday afternoon at the Etihad Stadium.

The Manchester derby has gained a special significance in recent years, following the rise of Manchester City as a powerhouse of England. A derby is always an intense game but in the recent years this fixture has gained an added importance. Also, it will be the first time both the managers of the club will face each other.

Webb, who took charge of the 2010 World Cup final as also the Champions League final, hasn’t refereed either of the Manchester clubs this season. Despite being widely regarded, as the best referee in England, both City and Liverpool fans (rivals of Man Utd) have accused Webb of favouring the Red Devils. However, last May, he gave Brazilian full-back Rafael da Silva the marching orders when Chelsea won at Old Trafford.

Webb officiated Everton’s 1-0 victory over Chelsea at Goodison Park and received widespread acclaim for his impressive performance. Former Liverpool striker and now football pundit Michael Owen says he is the best referee in the Premier League.