Last night in Manchester, two familiar faces of the city, Manchester United and Manchester City, played out their respective League Cup last 16 ties. It wasn’t a win-win situation for the city though, as Manchester United slumped to a penalty shootout defeat to Middlesbrough at Old Trafford.

Meanwhile, five miles down the road from Old Trafford, Manchester City eased into the quarter-finals in a game that had an ending symbolic of the prevalent connotations. Two of City’s prospects, Kelechi Iheanacho, 19, and Manu Garcia, 17, combined to score the fifth goal in a sweeping counter attack.

While both players cannot actually be said to have been cut from the Sky Blue fabric, their success on the pitch last night — Iheanacho scored one and assisted two — could be the standard to which Manchester City’s long-term ambitions measure themselves.

In the other half of Manchester, Manchester United academy products James Wilson and Jesse Lingard were fairly anonymous; Wilson survived only one half of football whereas Lingard stayed on for 120 minutes as he was sucked dry by the baggage of responsibility befalling him. As was the case with Andreas Pereira.

In a way, the contrasting fortunes of the two Manchester clubs last night was representative of the current state of affairs. And the League Cup — which is apparently used by the elite clubs to hand playing time to youngsters and non-regulars — is a good barometer to assess how Manchester City are seemingly ahead of their rivals in the youth game.

On the opening day of the 2015/16 Premier League season, a statistical time count of the number of consecutive games of each of the 20 clubs with a youth product in their match day squads made for an interesting read. Manchester City had the number zero (0) against them, whereas Manchester United were the leaders, with 3744 consecutive games. 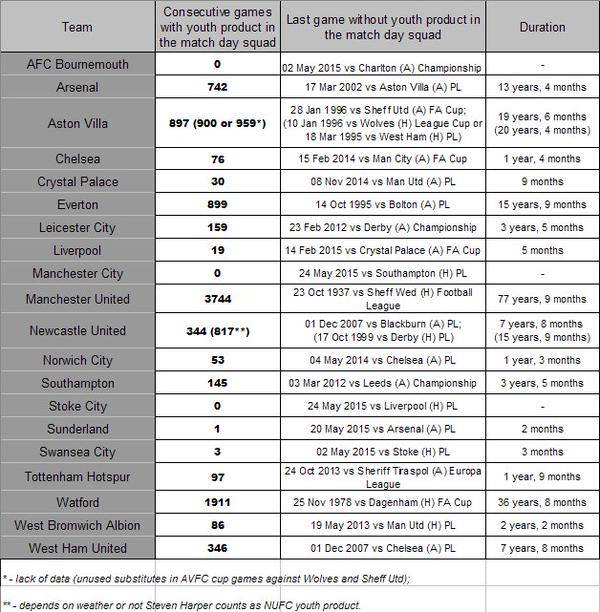 Whether that statistic is a true reflection of where the two clubs are headed to in the medium to long term is hard to quantify, but as of now, Manchester City are visibly ahead of United. While United might throw around their under-21s title from last season as proof of their sense of direction regarding building from the bottom, it is City who are running the rule in truth.

According to information taken from the Guardian, in the month of September alone, City dominated United across the different age groups, with the saving grace for the Red Devils being a solitary draw amid a succession of losses, which included a 9–0 defeat for the under-14s. City’s under-13s and under-10s are the current national champions.

Their under-15s and under-16s are thriving, and as of now, the club have no less than 26 youth internationals in their books aged between 16 and 19, starlets who will be grabbing headlines in a few years. Or in the cases of Iheanacho and Garcia, in the present day.

Another damning indictment of Manchester United’s supposed current malaise down the tree is the fact 66 percent of players in City’s academy are local boys. What was understood to be United’s entitlement long before the Class of 92 became a cult now sees City making all the right moves and winning the battles that would, one day, see them well-equipped for the war.

That the likes of ex-United stars like Robin van Persie, Darren Fletcher, Phil Neville and Andy Cole have sent their sons to City’s academy tells things about the broader picture in Manchester. The investment is at City, both of quantity and quality, which has quietly but quickly seen the blue half of Manchester stealing a march on their rivals.

Micah Richards, now at Aston Villa, was the last genuine first team regular to emerge from City’s almost non-existent academy a decade ago. That was a time when City were off the global footballing map, and United were the superpowers. Fast forward ten years, and things look surprisingly worse for United than City.

Iheanacho and Garcia are just the start and a show of how good City have done things in recent years regarding youth, whereas Wilson almost moving out of the club in the summer and Lingard’s recent emergence following Memphis Depay’s uncomfortable adaptations to life in England shows the difference in directions at the two clubs.

There are almost unbearable demands at both clubs, but City look to have found a better solution than United for the longer term problems. There are plenty risks involved with the progression of young talents into the fiercely competitive atmosphere both City and United operate in, and if last night’s contrasting results were a pointer, then in the short term, it’s City who seem to be doing all the right things.