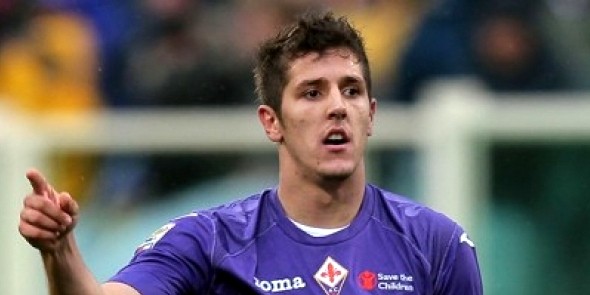 Fiorentina president Andrea Della Valle knew full well that it was probably out of his means to keep hold of star striker Stevan Jovetic in the summer, after completing yet another impressive season in the Serie A.

Meanwhile, the Montenegro forward is yet to choose his pick with plenty of offers on the table this summer, mostly from England and Italy. Premier League heavy weights Arsenal, Chelsea, Manchester United and Manchester City have, at some point of time, registered a heavy interest in him, while Serie A giants Juventus reportedly tabled a bid for the striker recently.

Fiorentina are particularly not interested in selling their prized asset to a rival club, that too at a much lower price. Hence, La Viola are looking to sell him abroad.

It seemed at one point of time that Jovetic is destined to join the Gunners, with some reports in England claiming that a personal deal has been agreed.

But, as the transfer window progressed, it seemed more and more likely that Jovetic will not be heading towards North London, rather, he might ply his trade at Eastlands with Manchester City.

Several top media organizations and bloggers that have deep connections within the club, suggested/wrote that Arsene Wenger was genuinely interested in signing Jovetic. But, the club have shifted their targets elsewhere – mostly Gonzalo Higuain of Real Madrid and off late Luis Suarez of Liverpool, and quite naturally, the interests in the man, who wears unusually the ‘no-8-jersey’, cooled-off.

Jovetic is a different sort of forward. He can play as a typical number 9, or as a second striker behind the main striker or often in the mould of a “trequartista.”

It is hard to define what he specializes at – he has a poacher instinct, he is brilliant with link-up-plays, he is superb at dribbling and can shoot from long ranges too. He has been deployed on the wing, when his side needed more defensive outlook, especially away from home in big games, and without surprise – he was brilliant there too. It all points down to one particular reason – the guy is supremely gifted and possess outstanding technical abilities.

However, he has only scored 14 and 13 goals respectively over the last two seasons. One might think, it is a relatively poor number for any quality striker, but he brings a lot more to the game with his over-all involvement like Luis Suarez of Liverpool or may be Sergio Aguero for Manchester City.

He is any manager’s dream and while he can play in versatile roles, it seems like his best position is that of a classic number ten.

He is equally good when he plays as a main striker. In such cases, he needs quality support around him to flourish. For instance, last season, he scored a brace against Inter Milan, where he was well supported by Serbian Adem Ljajic, who also scored twice in that match, as Fiorentina won by 4-1.

On the other hand, City making a move for Jovetic makes a lot of sense. Jovetic can play at his customary position behind the striker role, forging a terrific partnership with either Aguero or Edin Dzeko, or can play as a striker too, surrounded by so-many naturally gifted attacking players in the side like Nasri, Silva et al. Getting goals is probably not the primary headache for new manager Manuel Pellegrini, rather adding an extra surprise-element in terms of creativity in the final third is his central aim.

Money is definitely not the issue here. Wenger has been given a reported transfer war-chest of £70 million to spend. If he can throw £30 million for Suarez, is to too hard to apprehend that he would have also paid £25 million for Jovetic?

Hence, it is basically down to the need of the hour for both the clubs. Whether or not, Arsenal would be able to land their prime targets, is a matter of conjecture, but if City lands Jovetic, they will surely get quality returns from a world-class player, who has hitherto yet to reach the peak of his career.