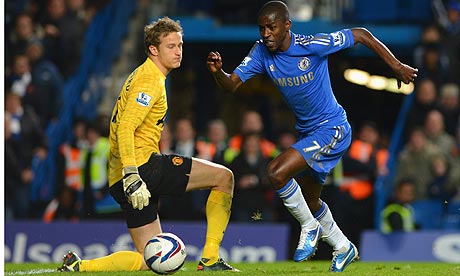 Jose Mourinho has confirmed that Chelsea have no intention of selling Brazilian midfielder Ramires to Real Madrid in the summer.

Reports emerged earlier this month that Real Madrid coach Carlo Ancelotti, who signed Ramires during his time as a Chelsea manager, wants to bring the Brazilian at the Bernabeu in the summer, as the Italian keen to bolster his midfield areas.

Earlier this week, The Times reported that Chelsea are preparing to offload two central midfielders and one of them is Ramires, who would cost around €30m. However, the Londoners would encourage such ideas only, should Madrid’s star midfielder Luka Modric be included as a part of the deal.

Spanish press however speculated that luring Ramires from Chelsea won’t be an any task, though according to Marca, Madrid are determined to grab his signature with president Florentino Perez already has given his approval and will do everything he can to sign the midfielder.

However, Mourinho has quashed such rumours, clamining that Ramires will stay at the Bridge. He said as quoted by Marca:

“Ramires stays at Chelsea. He will not be sold. I have a great friendship with important people at Real Madrid and they know that Ramires is staying at Chelsea.”

Chelsea have been linked Real Madrid duo Rafael Varane and Sami Khedira, but Mourinho insists he has no plans to sign any players from his previous club.

Ramires is a typical Jose Mourinho-type player – a hard working and versatile midfielder from whom commitment is always guaranteed. Therefore, it is highly unlikely that Chelsea will sanction any move for Ramires, unless they are presented with an offer they can’t refuse.