Give us €100m: Monaco ready to sell Falcao to Chelsea

According to the latest reports from France, Monaco super-striker Radamel Falcao could be available for a mammoth €100m; with Chelsea ready to pounce.

French newspaper, Le 10 Sport, have revealed that growing discontent within the ranks at the French club, particularly between Falaco and manager Claudio Ranieri, have forced Monaco to entertain the idea of losing their prized asset.

Chelsea have long been admirers of the striker, who has scored eleven goals already for his new side in sixteen games; and the Blues could now be a step closer to sealing a deal for the Colombian.

Ranieri and Falcao’s relationship has soured, according to Le10, with matters made worse after the 27-year-old was hauled off early in the recent game against Nantes.

It is now reportedly a choice between Ranieri or Falcao for the club; with Chelsea looking to generously reimburse Monaco’s investment in the goal-machine. 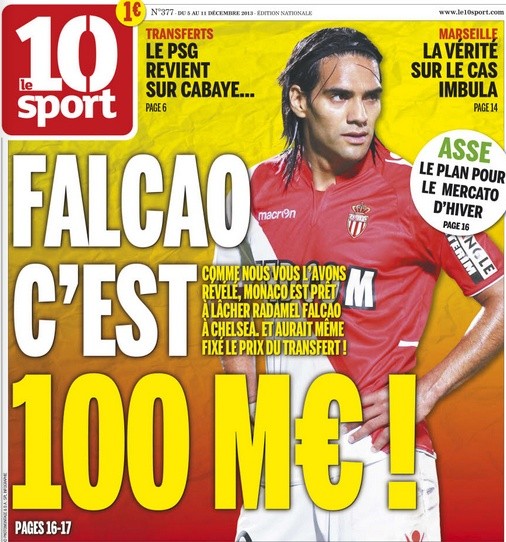 The €100m quoted by the French publication seems a little steep; but they go on to suggest that Demba Ba or Fernando Torres could be used as makeweights in a potential deal.

Either way, if this deal materialises, it could come close to a world record fee; and to that end, we at Soccerlens need a little more proof before we start phoning the record keepers.