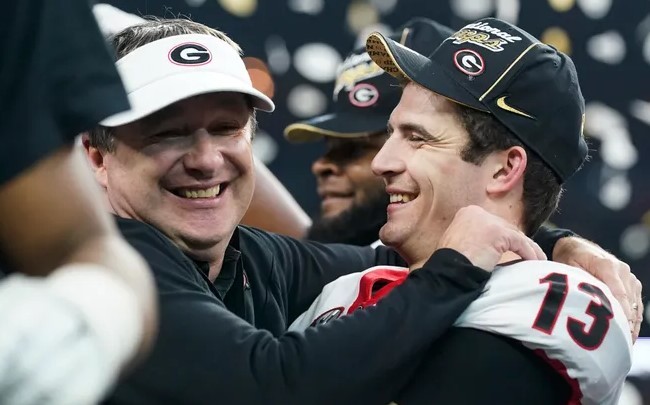 Stetson Bennett is a back-to-back national champion at the college football level, but people are doubting that he can make it in the NFL. His head coach at Georgia, Kirby Smart says that Bennett should be given an opportunity to play for a long time at the next level.

Stetson Bennett will likely find his way to a place on an NFL roster come the end of April. However, there a lot of doubters on whether Bennett will make it in the professional ranks. His head coach Kirby Smart has no doubts that Bennett is a pro in the making.

Kirby Smart says people are sleeping on Stetson Bennett as an NFL QB. We debate now on @undisputed

“People have slept on Stetson Bennett for too long,” Smart said. “He needs an opportunity to play for a long time at the next level.”

Smart used some plays he saw from Bennett in the second of his national championship wins to highlight how good he thought he was.

“He saw a max blitz and he beat the max blitz and ran for a first down in one of the biggest plays of the game, which takes a phenomenal athlete, and he knew what was coming and he set the guy up.,” Smart said.

“And he did a change of protection and made an elite throw. He schemed up a run. Ran a mid-line run which nobody runs. He ran for a touchdown because he’s got a tackle that’s like a tight end out there in Broderick [Jones]. When you’ve got a quarterback that can do the protections and check things and know what the defense is doing, but yet still beat you with their feet, you got a high-level quarterback.”

Nothing has come easy in Stetson Bennett’s career so far. He transferred to a junior college after being a walk-on at Georgia before eventually transferring back. He eventually got his start in 2021 when Bulldogs QB JT Daniels suffered an injury. Since taking over the reigns, Bennett has gone 29-3 and won back-to-back national championships. Seems good.

Bennett is projected as a late-round pick in the 2023 NFL Draft. Whichever team drafts him will at least know they have a proven winner in their ranks.