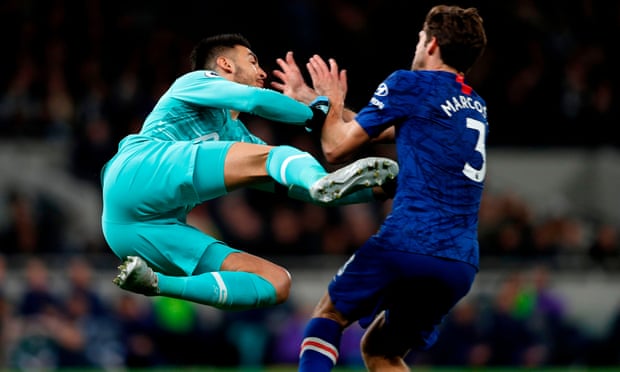 Tottenham Hotspur suffered their first home Premier League defeat of Jose Mourinho’s reign at the hands of Chelsea on Sunday.

Frank Lampard’s men scored twice in the opening 45 minutes, and Spurs’ woes were further compounded 17 minutes into the second-half when Son Heung-min was shown his marching orders for violent conduct on Antonio Rudiger.

Tottenham were caught napping for Chelsea’s first goal, with Willian making the most of some uninspiring defending from the hosts to open the scoring 12 minutes into the game.

Goalkeeper Paulo Gazzaniga made things worse on the stroke of half-time, making a meal of a long ball into his box and lunging himself at Marco Alonso while attempting to clear.

The Argentine could have easily and comfortably caught the ball, but his decision to use his legs – thereby giving a penalty away – baffled many, including Match of the Day presenter Gary Lineker who reacted thus on Twitter:

Gazzaniga’s error reeks of naivety, and it is safe to say he dealt a blow on Spurs’ chances of getting back into the game.

A win would have seen Mourinho’s men go level on points with Chelsea and boost their top-four chances heading into Christmas, but they are now six points behind their London rivals.