Chelsea manager Jose Mourinho has ruled out the possibility of remaining unbeaten throughout the season, but insists his team is gradually reaching the level of his previous side that won back to back Premier League titles during his first spell in charge at the club. With seven wins and a draw in the opening eight matches, Chelsea are giving the impression that they’re almost impossible to beat.

It is well known that Mourinho’s side generally improves in his second season. It has happened with Porto, Inter, and Real Madrid before, so Chelsea doing well this season shouldn’t come as a big surprise. But, what changed everything within the course of few months? What is that x-factor that makes them look like invincible at the moment? 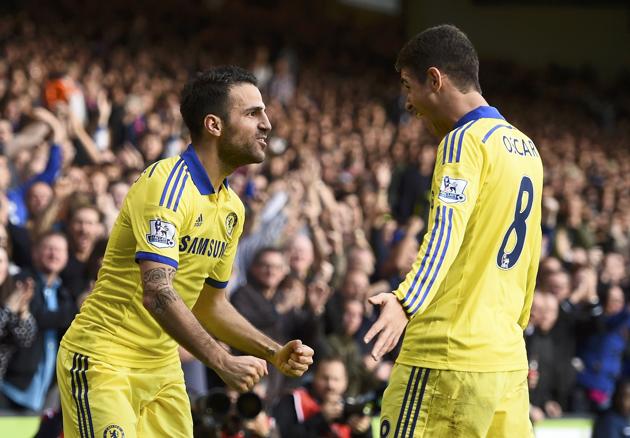 Time, oft-used, is crucial here. The more time Mourinho spends with the team, better it is for the players to grasp his philosophy.

Likewise, Mourinho has been able to work on developing an attitude among his players. After the victory against Crystal Palace on Saturday, he said that his players now have “big balls” to see off any challenges.

Also, the more time these players spend together, they develop a sense of trust among each other. Of course, it is impossible to keep everyone happy (example Petr Cech), especially in a squad with multiple world class players, but judging by the fluid movement of the team, the defensive solidarity and the fighting spirit they’ve shown at times, only suggest this team is sewn with a strong harmony.

The best thing about this team is each and every player is prepared to do what Mourinho asks from them. They never question his methods, because with time they now understand Mourinho’s personality. They understand he is not the man to mess with and that he is very demanding.

Oscar is happy to put in loads of defensive shifts each and every game. His natural attacking game is curtailed at times, but he never complains. Andre Schurrle, Willian and Salah understand the importance of squad rotation and are happy to wait for their chances. And when you slowly earn that faith and loyalty from your players, positive results are bound to happen.

The new signings have made a huge impact. Mourinho openly criticised his strikers last season, and got rid of them in the summer.

In place, he signed players of his choice. Diego Costa has already scored nine league goals in seven matches, while Loic Remy has chipped in well when needed. Didier Drogba may not contribute enough on the pitch, but the club legend is seen as an inspirational figure at the Bridge and with him around there will be no dearth of motivation.

Likewise, Cesc Fabregas has rediscovered himself at Chelsea after his torrid time at Barcelona, and has managed seven assists already. He has forged a strong central midfield partnership with Matic (probably best midfield combo in England) and developed a telepathic understand with the forwards, especially with Costa.

But it is not just about Costa or Fabregas

Costa and Fabregas have played a major role so far, but they are just as good as the team itself. Players now work with more maturity and knowledge under Mourinho; team chemistry is stronger than before.

“There is a feeling that our team improved because of Diego,” Mourinho said. “It’s right to say that, but at the same time this team had a big improvement. We come here and impose our game. We had the ball, we passed the ball, we moved the ball. They [Palace] had two or three situations in the first couple of minutes and after that everything is under control.

“Last year my team was naive, so we work and in this moment I am happy. We are not a perfect team but this is a better team.”

It’s futile at the moment to discuss two questions – a) whether Courtois is better than Cech? and b) whether Mourinho is doing right by keeping Cech on the bench?

We have to get on with the reality. Cech probably is unhappy with his situation and might leave the club in the next transfer window, but he can simply do nothing here (Courtois’s outstanding form), and neither Mourinho. He has been a great servant of this club and has earned glory for Chelsea. The club is indebted to him for his immense contribution all these years.

At the same time, he is not getting younger, and Mourinho probably feels that the time is ripe to look ahead for the future. And Courtois is the future of this club. The Belgian has the age on his side to serve Chelsea 8-10 good years from here on. For a potential world class talent (if not world class already) who has shown his brilliance with Atletico Madrid in the past three seasons, it was time for Chelsea to give him the platform to shine for the club he signed at the first place.

He is undoubtedly one of the best in the league, if not in entire Europe. It’s amazing that how he controls his territory and organise his defence, despite having strong personalities like Terry, Ivanovic and Cahill at the back. Chelsea defenders are always safe with him. These players know (trust, mentioned early) that unless they make a serious blunder, Courtois will not concede any silly goal.

Nemanja Matic – the one & only one

The Serbian has played in all the eight matches, clocking 720 minutes of football – he is indispensable, and irreplaceable. He is, in a nutshell, ‘the most important’ player for Chelsea. In him, Mourinho has found his Makelele.

He is the midfield fulcrum, the heart beat of this side. He tackles, does all the dirty jobs, maintains possession, joins attack, provide safety belt to the defence and scores as well – a dynamite that every manager would love to have in their team.

Chelsea swallowed their pride to resign their former player at a higher price, but this one decision, Mourinho will never regret in his life.