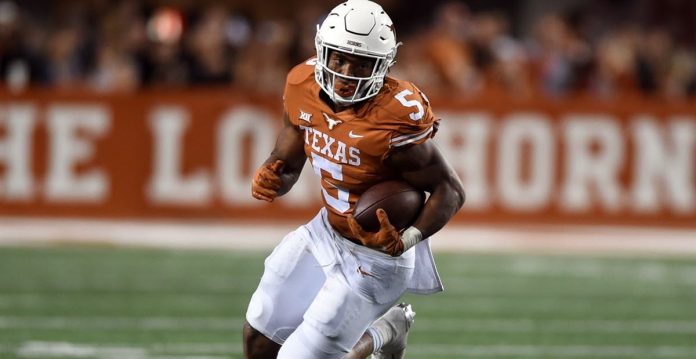 Several of college football’s top awards were handed out on Thursday evening, and Texas running back Bijan Robinson took home the Doak Walker Award. The award is given out annually to the top running back in NCAA football. An impressive year from the Longhorns running back saw him take home the award and draw praise from ESPN NFL draft expert Todd McShay. McShay heaped praise on Bijan Robinson, comparing him to current New York Giants RB Saquon Barkley.

Longhorns running back Bijan Robinson will likely be the first running back off the board in the 2023 NFL Draft. While he is unlikely to go as high as number two like former Penn State running back Saquon Barkley, it hasn’t stopped the comparisons between the two.

“Bijan Robinson to Saquon Barkley,” McShay wrote. “Both are 6-foot and 220-plus pounds. Both take tremendous care of their bodies. They both excel at forcing missed tackles with an elite combination of shake and power. Both are outstanding pass catchers and very reliable in pass pro. And both bring energy on game day.”

While Robinson shouldn’t be touching the top of round one in the draft, he is projected to go somewhere between mid-first and early-second round.

The best running back prospect since Saquon Barkley, Bijan Robinson.

The vision, balance and cuts on this run is nutty stuff lol. pic.twitter.com/ilGT8VP13J

Robinson also hasn’t officially declared for the NFL Draft just yet, but is widely expected to do so soon. Should he declare, he will likely opt out of the Texas Longhorns’ Alamo Bowl game against Washington on December 29.

While Barkley may be a slightly better receiver than Robinson, if he can match Barkley’s NFL production, he will undoubtedly make himself a rich man.