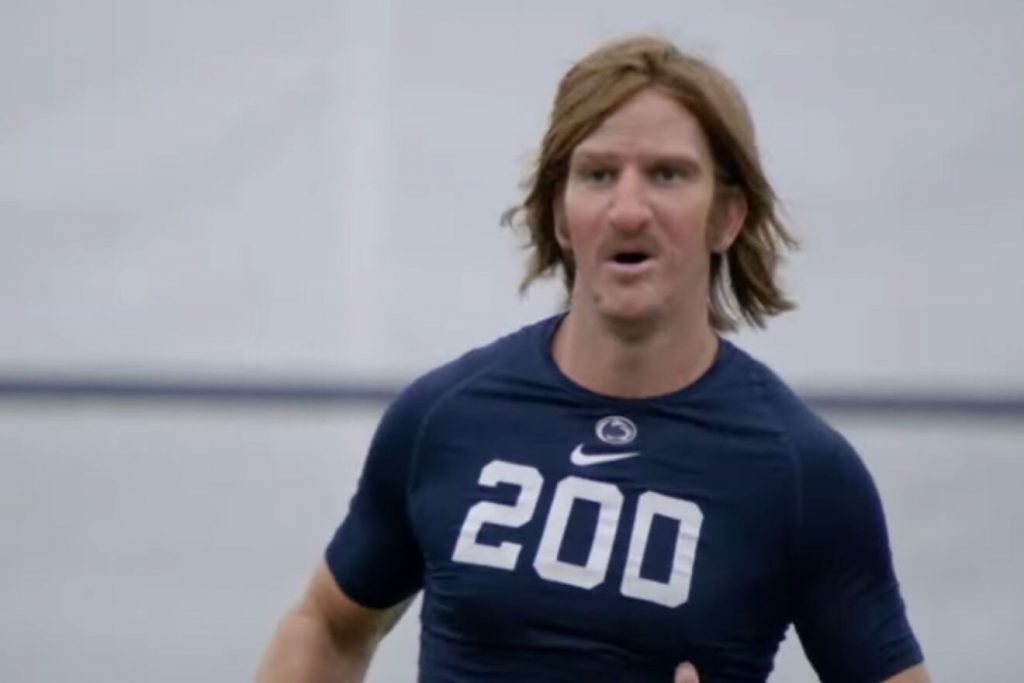 Two-time Super Bowl MVP, Eli Manning came out of retirement for a segment in his show, Eli’s places. Manning tried out for Penn State as quarterback, Chad Powers. It was, of course, just a skit planned with the permission of Penn State head coach, James Franklin.

Who is Chad Powers?

Eli Manning created quarterback Chad Powers for a skit in his ESPN+ show, Eli’s places. Powers attended trials at Penn State where he was competing for a place as a walk-on.

The 6’3″ quarterback certainly drew some looks and comments from other potential walk-ons. The mask and wig did a good job of hiding Eli’s real identity, but was unconvincing at hiding his age. One student even went so far as to say that “[Powers] looks about 32,” not to his face of course.

.@EliManning went undercover as a walk-on at Penn State.

In the skit, Chad Powers runs a timed 40-yard dash and hilarity ensues. Powers is at the start line talking to another walk-on when he comes up with the line, ‘think fast, run fast’. He repeats it over and over before referring to himself as ‘Fast Chad’.

‘Fast Chad’ gets clocked at 5.49 and Penn State head coach, James Franklin, who is in on the joke, has a chuckle to himself. It seems like Eli was moving quicker than in his playing days (!) to us, but who are we to judge.

Fast Chad gets his arm loose

Then comes the throwing portion of the drill and it’s ‘Fast Chad’s’ chance to really shine. Initially, Powers misses a couple of throws, before landing a bomb on the money. Most of his throws actually looked pretty decent but there were a couple of drops and this caused one of the coaches to tell Franklin that he wanted to keep Powers because ‘there’s something about him’. Yes, sir, we can confirm there is.

Chad (aka @EliManning) was turning heads at Penn State tryouts.

Part 2 of Eli going undercover as a walk-on 😂 pic.twitter.com/eCfr9kt69T

Does Chad Powers make the cut?

At the end of the clip, Powers is called out by Franklin for his poor physical performance at the try-out. He says he is too slow, but also that he has no eligibility left. Chad Powers finally takes off his mask and reveals himself to stunned Penn State students.

We think Chad still has a COVID year left and this was just an administration error. Come try out for our school, Fast Chad Powers!