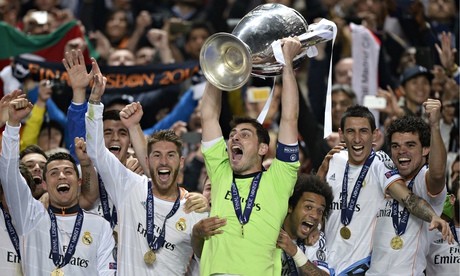 Real Madrid have confirmed their legendary goalkeeper Iker Casillas has left the club and will join FC Porto after two clubs reach an agreement on Saturday.

The Spain international has won every competition at club and country level and has been with the 10-times European champions since the 1990, where he came up through the ranks of the club before breaking into the first team in 1999.

After making over 500 appearances for Real, Casillas will now join the Portuguese club to end his long career at the Spanish capital club.

A statement on Real’s official website read, “Real Madrid C. F. and FC Porto have reached a deal on the transfer of Iker Casillas to the Portuguese club.”

“Thank you Iker, for everything you have done. Thank you for being a symbol of the best in our history. You are going but we will never forget that you’ll always belong to the heart of Real Madrid.”

Casillas’ departure will now leave a position vacant. Real have long been interested in signing Manchester United star David De Gea. He has one year left on his contract and has already refused to sign a new deal.

De Gea has set his heart on returning to Spain and join his former club Atletico Madrid’s local rivals. It should be seen whether United will allow him to leave the club this transfer window.

Louis van Gaal wants Real defender Sergio Ramos as a part of the deal. It should be seen whether the La Liga giants will part ways with their star player in their bid to sign De Gea.