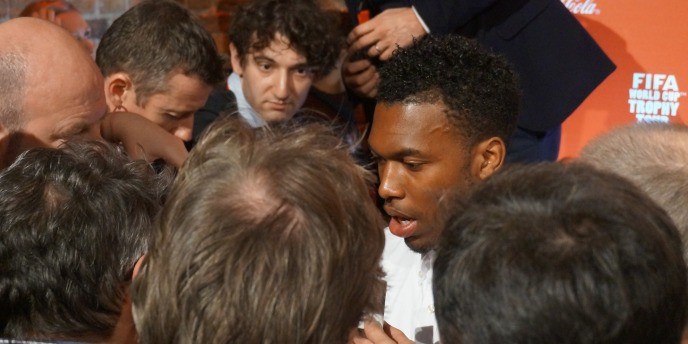 The World Cup trophy was triumphantly unveiled to the English press on Thursday in London, with England striker Daniel Sturridge warning that his Liverpool teammate Luis Suarez could be the one to watch in Brazil this summer.

England are faced with a tricky group stage, with the Three Lions up against Italy, Costa Rica, and Uruguay, who are spearheaded by Sturridge’s Liverpool teammate, Luis Suarez.

The pair have formed a deadly partnership this season, scoring 45 goals between them so far, and when asked who we should watch out for this summer, Sturridge warned that his 27-year-old teammate could be one of the stars of the tournament,

“We’ve talked about the likes of Neymar, Messi, Ronaldo, and there’s also my mate Luis (Suarez); there will be a lot of exceptional players there.”

The Liverpool and England hitman was flown to London by helicopter to attend the English-leg of the ‘Coca-Cola World Cup Trophy Tour’ on Thursday, and was joined by FIFA ambassador Christian Karembeu, former France international and 1998 World Cup winner, who is traveling across the globe with the trophy..

Sturidge was not able to get his hands on the trophy on the day, with only winners and Heads of State allowed to touch the magnificent piece.

The temptation must have been overwhelming for the 24-year-old, who is set to lead the line for England in what will be his first World Cup as a player.

A glittering marvel; Soccerlens were captivated by the sight of arguably the most iconic symbol in football.

Karembeu was the only man in the room allowed to touch the trophy, which he did with evident satisfaction!

Sturridge, who scored the winner for England in their international friendly against Denmark earlier this month, insists England will travel to Brazil with their heads in gear,

“We’re confident. We want to try and play good football, get out of the group, and go from there.”

“It’s important we go out there with the right attitude. We know what we have to do, and we’ll try and go out and do the job.”

While he is very much looking forward to the summer, Sturridge is still modest about his chances of being on the plane to South America,

“I’ve always dreamt of it (playing in the World Cup), but i’m not in the squad yet. There’s 10 games to go (this season), but I really hope I get on the plane.”

After an exhausting afternoon, there was still time for the striker’s parents to clamber up on stage, and gaze intently at the solid-gold, 18-caret trophy with their son, who many will agree is the best chance England have for goals this summer in Brazil.

The unprecedented ‘Coca-Cola World Cup Trophy Tour’, which will see the the trophy travel nearly 100,00 miles – across 90 countries in 6 continents – will continue through the UK over the next seven days, with fans able to get have their picture taken with it before it flies to the Netherlands on 18th March.

Check out the official website for more details, and find out when and where you can join the party.

What do you think? Can Sturridge fire England to glory this summer? Get involved in the comments below…